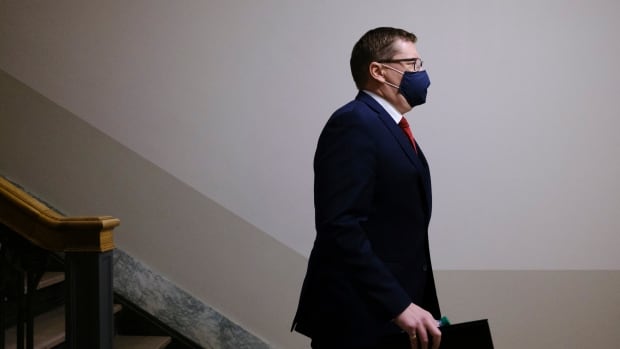 Scott Moe won’t budge. There will be no change in his pandemic control strategy, grounded in his belief about how the pandemic affects the economy.

To Saskatchewan’s premier it is a trade-off: the more you lock down, the greater the economic damage, which causes so much harm that it outweighs the benefit of keeping the virus at bay.

If the premier is right that major economic damage is the unacceptable price of a convincing victory over the virus, it becomes a pick-your-poison scenario: your money or your life.

This was an important theoretical debate at the beginning of the pandemic. After more than a year, the evidence to settle it is starting to emerge. It does not support Premier Moe’s assumptions.

Looking at the data

An analysis published in Nature at the end of January looked at the relationship between restrictions on mobility in workplaces, the retail sector and recreational facilities (a measure of economic slowdown), and the COVID death rate in 33 highly developed jurisdictions, including Canada and 10 American states.

There’s a lot of sophisticated math and method in the analysis, but here are the highlights:

In short, many countries — including most of Canada — created a lose-lose situation where both people and the economy suffered needlessly.

What were the fatal missteps?

The key to success was straight out of the preventive health manual: detect early and respond decisively. The east-Asian countries and Canada’s Atlantic provinces that did so well locked down fast and hard when case numbers were still low, ramped up testing and tracing, and quickly flattened the curve. They could then lift restrictions and either keep them off permanently or reimpose them with sharp but short “circuit-breakers” to quell new outbreaks.

By contrast, countries that waited too long, imposed as few restrictions as possible and steered clear of mandatory measures saw their case numbers rise, overwhelming their ability to keep up with testing and contact tracing. Tougher measures became inevitable and had to stay in place longer.

The tepid early response, intended to cut the economy some slack, backfired spectacularly. It was short-term gain that bought long-term pain.

Saskatchewan fared relatively well in the pandemic’s first wave. The government could have followed Atlantic Canada’s lead in the summer and early fall to keep case numbers as low as possible. Instead, the premier developed a false sense of confidence, promising voters during his fall election campaign that he would not impose another lockdown despite clear warnings of an impending second wave during the winter.

Moe takes pride in having had the fewest restrictions of any province, even though our rate of active cases has often been the highest in the country in recent months.

The pleas of health-care workers and public health leaders have been ignored. The lessons from successful jurisdictions have gone unlearned. – Steven Lewis, Nazeem Muhajarine and Cory Neudorf

The premier also miscalculated the extent to which he could orchestrate economic activity. Just because people are allowed to travel or eat in a restaurant or go to a bar doesn’t mean they will. Many will suspend or curtail normal economic activities they perceive to be unsafe.

As the pandemic persists, and with each new report of a 34-year-old fighting for life in the ICU, the premier’s claim that everything is going as planned rings hollow.

Late is better than never

The premier’s initial gamble and stubborn refusal to change course in light of the evidence have harmed people and the economy at the same time. He has ignored one of the fundamental lessons of economics: uncertainty is the enemy of business as usual.

The pleas of health-care workers and public health leaders have been ignored. The lessons from successful jurisdictions have gone unlearned. Communications have been deliberately and mischievously ambiguous.

So here we are in year two. What now?

As more infectious and lethal variants take hold and the third wave swells, Saskatchewan is in a dangerous place, blindly walking into what may be the most treacherous period yet. The ICUs are already full and the virus hasn’t waved the white flag.

Vaccines should eventually do what policy did not. The pandemic may be behind us in a few months. We hope so.

There is no undoing the damage already done. There is much to answer for. The reckoning can come later, but the government urgently needs to institute measures that stand a chance of avoiding the harm on the horizon.

Enlightenment is long overdue, but late is better than never.

This column is part of CBC’s Opinion section. For more information about this section, please read this editor’s blog and our FAQ.

Interested in writing for us? We accept pitches for opinion and point-of-view pieces from Saskatchewan residents who want to share their thoughts on the news of the day, issues affecting their community or who have a compelling personal story to share. No need to be a professional writer!

Read more about what we’re looking for here, then email [email protected] with your idea.