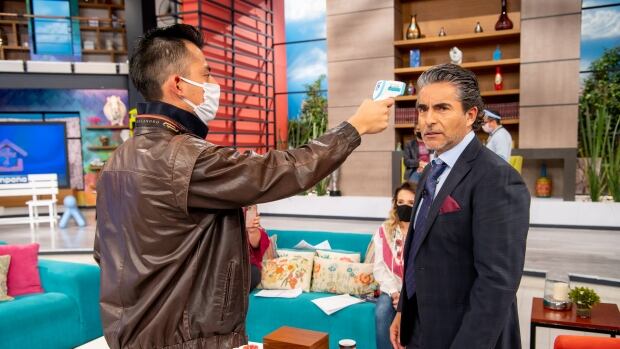 Some of the top creative minds at Mexican broadcaster Televisa are puzzling over an unexpected challenge: crafting their signature soap operas without a single love scene, or even a tender kiss.

As cases of coronavirus mounted in Mexico, producers were forced to scratch physical contact from their typically steamy telenovelas. Then the cameras stopped rolling altogether.

“We follow the motto: The show must go on,” said producer Lucero Suarez, who halted production of her hit Te Doy La Vida (I Give You Life) in March.

“Never in my life have we stopped a novela.”

After decades of keeping viewers on the edge of their seats with its high-octane soap operas, Mexico’s largest broadcaster is facing a cliffhanger of its own.

When will Televisa’s army of producers, actors and actresses return to the set? Even the company’s top executives can’t say for sure.

Like its Hollywood peers, Grupo Televisa was forced to suspend production of series and novelas — the soaps that typically air daily episodes during the week — to avoid spreading coronavirus among cast and production crews. The broadcaster hopes to resume filming in late May or early June, albeit with fewer moments of passion.

Televisa’s shares have slumped 78 per cent over the past five years amid anemic earnings growth. More recently, advertising has waned as the federal government and companies make cuts. Streaming giants such as Netflix Inc and Amazon.com Inc have also made a run for an audience that Televisa long had almost to itself.

Like all broadcasters and media companies that rely on advertising income, the coronavirus has further complicated Televisa’s fortunes, analysts say.

“On the one hand, with everyone staying home, ratings are through the roof,” said Gilberto Garcia, an analyst with Barclays.

“On the other hand, given that everybody has to stay in, advertisers are very much cutting back on their budgets.”

With more people staying inside, Televisa’s audience in Mexico has risen 19 per cent over the past three weeks, a spokesman said. Novelas, which dominate the primetime lineup, are crucial to the equation. The company’s stash of fresh content should last well into the summer, co-chief executive Alfonso de Angoitia said on an earnings call last week.

Televisa’s unit providing cable TV and broadband has become its biggest moneymaker. Yet content still accounts for 27 per cent of net sales and could become even more vital as growth in the cable unit slows, Garcia said.

For decades, Televisa profited handsomely from low-budget novelas that dominated Mexican airwaves and were successfully exported to far-flung markets overseas, too.

The broadcaster still holds a commanding lead in Mexican ratings, but in recent years it has lost viewers to streaming services that have invested heavily in Latin America and hooked audiences with flashy dramas such as Netflix’s Spanish thriller Money Heist.

Televisa has an admirable record of holding novelas to their production schedules in the past, even after a devastating earthquake struck Mexico City in 1985. Strikes that occasionally delay filming in Hollywood have been virtually unheard of. At least two of its shows have been disrupted by the coronavirus, however.

Crime drama Imperio de Mentiras (Empire of Lies) was only able to complete about 20 per cent of filming before production ground to a halt. Once scheduled to debut in late April, its premier has been pushed back to the summer.

Suarez’s show, Te Doy la Vida, is focused on a love triangle involving the adoptive and biological parents of a boy with leukemia and debuted in March to strong ratings. As cases of coronavirus rose in Mexico, Suarez and her team ramped up production, tacking on an additional day of filming on Saturdays.

With the finale tantalizingly close, Suarez said she was tempted to press on. But as her team grew more nervous, she halted production. In the last stretch, scenes were filmed with social distancing measures — no hugs, kisses or other physical contact between cast members.

At times, actors struggled to channel their characters’ emotions within the new rules of the game. Cesar Evora, a Televisa veteran of roughly 27 years, recalled filming a wake in which characters gathered to mourn without ever embracing.

“It was pretty surreal,” he said.

Suarez has churned out hit novelas for decades, soldiering on through injuries to her leading men and other unforeseen obstacles. She is nervous about navigating the return to the set, fearing it will be like “starting over.”

Most vexing of all could be the love scenes. But Suarez said she has already reworked some, opting to show the moments just after passion, such as one character touching up her appearance at the vanity while the other lounges in bed.

“You get the idea,” said Suarez, who spoke with Reuters by phone last week.

She noted she had taken to watching a lot of Turkish soaps, which have borrowed Televisa’s formula with great success, though intimacy is only implied.

“If my last scene is not a kiss … we will make do,” Suarez said. “Sometimes you can convey love with just a glance.”