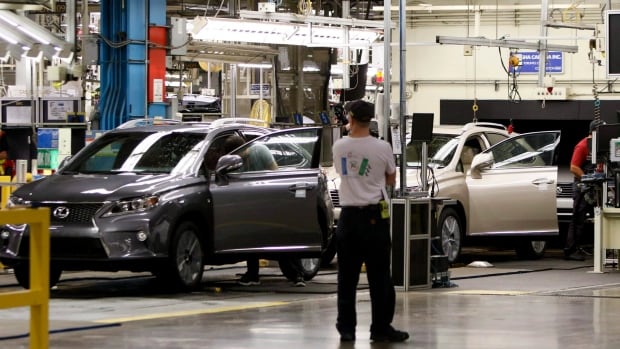 Some Toyota Canada workers at two Ontario plants have been told to follow a workplace self-isolation policy, a measure health officials say is uncommon outside health-care settings and is being questioned by a worker and an epidemiologist.

Workers affected by the policy were in contact with a third-party contractor who performed rapid testing at plants in Cambridge and Woodstock, and who later tested positive for COVID-19.

Employees in work self-isolation were told last week to follow strict safety measures, both on the job (including physical distancing and wearing personal protective equipment (PPE) and at home (self-isolating). The policy at the two plants is set to end Thursday.

Corey Wyniarsky, who has worked at the Cambridge facility for 13 years, wasn’t among the employees in contact with the third-party contractor, but said the self-isolation measure at work does worry him.

“Why would they not want a high-risk close contact to stay home for seven days, just to be sure?” said Wyniarsky.

The contractor has not tested positive for a variant. He wore full PPE and was in close contact with employees for less than 30 seconds, according to a company spokesperson.

“Due to these and other mitigating circumstances, public health officials decided that these workers could practise ‘work self-isolation’ until April 8,” said Michael Bouliane in an email.

The contractor was last at the job site on March 26, according to a Toyota spokesperson.

All workers affected have now been tested and all results came back negative, Bouliane said. He did not say how many were in contact with the positive case.

About 8,500 people in total are employed at the assembly plants in Cambridge and Woodstock. It’s uncertain how many employees are affected by the workplace self-isolation policy.

There may be exceptional circumstances where work self-isolation may be considered for a lower-risk, unique exposure … based on consultation with the Ministry of Health and Public Health Ontario.– Dr. Ryan Van Meer, Region of Waterloo Public Health

Region of Waterloo Public Health says work self-isolation is uncommon at job sites. The policy would typically be used in health-care settings where patients’ care would be affected if staff were sent home.

As for non-health-care workplaces, “there may be exceptional circumstances where work self-isolation may be considered for a lower-risk, unique exposure … based on consultation with the Ministry of Health and Public Health Ontario,” Dr. Ryan Van Meer, the region’s associate medical officer of health, said in a statement.

The health unit did not immediately respond to a request for further comment about why Toyota’s circumstances were considered exceptional. The statement did not say how many times the health unit has advised about this strategy since the pandemic began.

As for Southwestern Public Health, spokesperson Megan Cornwell said this was the first time it has advised work self-isolation as a strategy, though it has been used elsewhere in the province.

The Middlesex-London Health Unit, about a 40-minute drive from Woodstock, said it has only recommended the policy once — in the case of a hospital experiencing an outbreak, where it wouldn’t have been possible to send all staff home without shutting down “a number of wards.”

Health unit spokesperson Dan Flaherty said: “The test we would use is the potential serious health implications were those staff not to be at work.

“We would discourage work quarantine unless it’s absolutely necessary, for instance, health implications.”

Zahid Butt, an epidemiologist and professor at the University of Waterloo, said he has reservations about work self-isolation.

If you start making changes to these rules, then your risk of transmission of virus increases.– Zahid Butt, epidemiologist, on concerns over work self-isolation

He said the Toyota measure is the first he’d heard of workplace self-isolation, and hopes it doesn’t become more common, especially at smaller job sites.

“The rules are in place so that you have to follow these things. If you start making changes to these rules, then your risk of transmission of virus increases.”

‘We should feel safe’

After the work self-isolation period ends at Toyota’s two Ontario plants, rapid testing will continue, although the company has now switched to a self-administered test.

As for Wyniarsky, he feels the company has handled the pandemic well overall, and hopes other new rules aren’t on the horizon.

“I understand we have to keep the line moving, but we should feel safe,” he said.

CBC News reached out to Ontario’s Ministry of Health as well as the Ministry of Labour for comment on the circumstances that allow workplaces to implement a work self-isolation policy, and how often this policy has been used since the pandemic began.

The Ministry of Labour did not say how often the policy has been used, but confirmed work self-isolation is allowed in “exceptional cases” in consultation with the Ministry of Health and Public Health Ontario.  A Labour Ministry spokesperson said specific questions should be directed to local public health units.

The Ministry of Health did not respond by publication time.