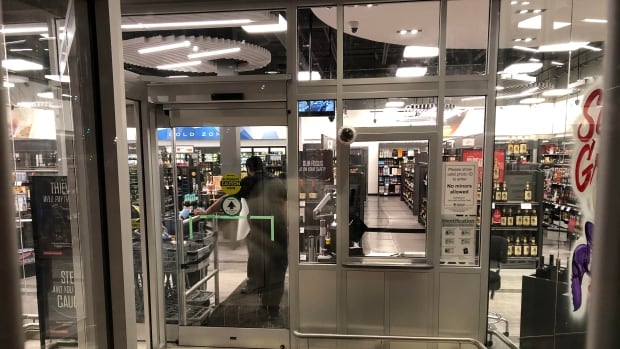 Liquor Marts have seen a dramatic drop in the number of thefts in Winnipeg since Manitoba Liquor & Lotteries began installing controlled entrances at its stores, the Crown corporation says.

In the last four weeks, there were fewer than 12 thefts reported at Liquor Marts in Winnipeg, a spokesperson said in an email Friday.

In addition, no robberies — which are defined as thefts involving violence or threats — have been recorded at any Liquor Marts in the last six weeks.

That’s also a steep drop from last year, where there were 16 robberies of Winnipeg Liquor Marts during the week of Oct. 21 to 27 alone.

That preceded the installation of the controlled entrances — a planned change that was fast-tracked following a violent robbery at the Tyndall Market Liquor Mart last November, during which employees were assaulted in an unprovoked attack.

The Tyndall Market store was the first one upgraded with an enhanced security entrance. All Winnipeg Liquor Marts are expected to have the controlled entrances installed by the end of June.

“Even with some Liquor Marts still in the queue to be converted, the results have been nothing short of staggering,” said Manny Atwal, president and CEO of Manitoba Liquor & Lotteries, in an email.

A 15-year-old was recently sentenced to three years in custody for the Tyndall Market assaults and robbery, which is the maximum youth sentence for that type of offence in Manitoba.