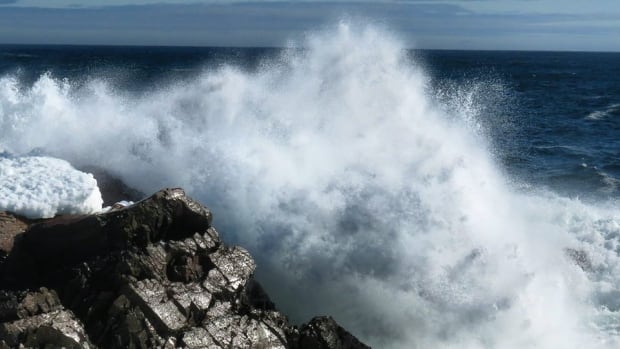 Southwestern Newfoundland is set to feel the strongest effects of post-tropical storm Teddy on Wednesday as the weather system tracks toward the island, bringing with it gusty winds, some rain, and strong waves.

What was once a hurricane will make landfall in Nova Scotia this morning as a post-tropical storm and track over the Gulf of St. Lawrence into Newfoundland throughout the day.

The area from Port aux Basques to Burgeo is under several weather warnings for wind, rain and storm surges, as winds could gust up to 110 k/hr along the coast this afternoon into the evening, according to Environment Canada.

“With those strong southerly winds, the main concern is going to be storm surge,” said Mike Vandenberg, an Environment Canada meteorologist at the Gander weather office.

“Waves offshore are in the six- to nine-metre neighbourhood and we are expecting some pounding surf along the coast this afternoon,” he said, with those waves coinciding with high tide.

There is also a Wreckhouse wind warning in effect today, with gusts up to 130 k/hr expected there. Other parts of the island can expect gusts up to 80 k/hr.

“It’s been mainly a wind event so far, and we do expect it to stay sort of a wind event,” Vandenberg said.

Across the island there will be rain, but not in overwhelming amounts.

Vandenberg said between 10 to 20 millimetres for most areas, with a few pockets that could get higher totals. Southeastern Labrador could see the most rainfall, about 45 millimetres, he said, before the storm clears out of the province altogether on Thursday.

The storm has already caused a few cancellations and disruptions. Belanger Memorial in Doyles is closed for the morning, with an update expected by 10:30 a.m.

Marine Atlantic cancelled all its crossings on Wednesday across the Cabot Strait.

Labrador Marine is also holding the Qajaq W in port in Blanc Sablon this morning, and will update on whether the Strait of Belle Isle crossings will go ahead later in the day.

After Teddy tapers off, Vandenberg said Newfoundland and Labrador is set for a few days of calm weather along with warm temperatures.

“That’s one benefit of Teddy dragging up all that warm air. It will make it feel like a second summer,” he said.