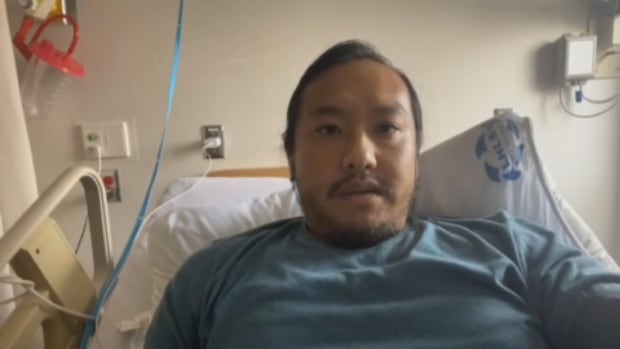 As a young and healthy 34-year-old, Brandon Wu never anticipated he’d contract COVID-19 and end up hospitalized with the disease.

“It sucks, I never thought I was going to have it, but here I am,” Wu said. “You don’t see this too often.”

“I want to be that one where they listen. I want to show how I’m feeling, how I am, because this is not a joke, this is very real.”

Wu spoke to CBC News on Tuesday from his bed at Windsor Regional Hospital while receiving an iron transfusion. Since being admitted to the hospital on Friday he’s posted videos to Facebook to share his experience with family and friends.

WATCH: In a video posted to Facebook, Wu says ‘this is the worst I’ve ever felt’

Wu is one of many young Canadians testing positive for the disease as cases across the country begin to rise once again. As of Tuesday, Ontario reported 478 new cases, the majority of which are in those under the age of 40.

A significant demographic shift in the caseload has taken place since June where instead of the virus disproportionately affecting elderly Canadians, most infections are being reported in those aged 20 to 39, Chief Public Health Officer Theresa Tam told a news conference in Ottawa Tuesday.

In Windsor-Essex, the local health unit has reported that more than half of the region’s cases are in those 39 years old and younger.

While Wu said he wants to share his story to put a face to the numbers, he also said he hopes he can show people why they should continue to wear a mask and protect themselves from the disease.

Wu told CBC News he developed symptoms Sept. 13 and five days later, he tested positive for COVID-19 and wound up in the hospital.

Like many others in Ontario, Wu said he’s pretty certain he contracted the virus from being in close contact with someone who tested positive.

The most severe symptom he’s had to deal with is shortness of breath, saying that it “feels like breathing through a straw, like my lungs are just literally coming down.”

Though the news came as a surprise, Wu is even more shocked that he’s having such an extreme reaction, especially as someone who has never been hospitalized before.

In the five days Wu has been in hospital, he’s had two blood transfusions — a procedure that he says has made him feel a little bit better, but he knows he has a long road of recovery ahead of him.

He said he wants to go home and start feeling better, but he’s still in a lot of pain.

At this time, it’s unclear when Wu will be discharged from the hospital.