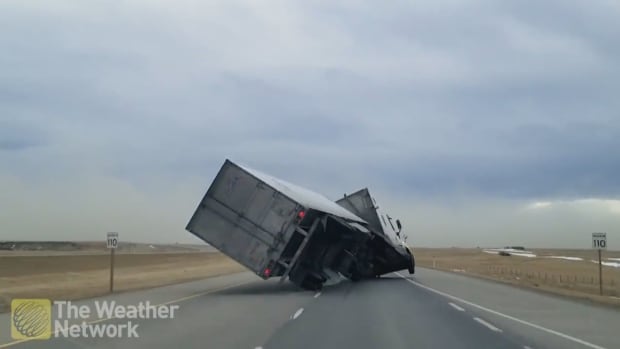 Environment Canada has issued a wind warning for Calgary, saying gusts could be strong enough to cause damage throughout the city.

The agency said wind gusts up to 90 km/h are expected Wednesday in some areas.

It warns that loose objects may be tossed, causing injury or damage.

“Be prepared to adjust your driving with changing road conditions due to high winds,” said Environment Canada.

The winds are expected to diminish by early evening.

News of strong winds in southern Alberta have been occurring over the past 24 hours.

On Tuesday, Kyle Brittain from The Weather Network tweeted a video of a transport truck tipping over due to winds just west of Granum, which is near Lethbridge, Alta.

The winds have come after unseasonably warm temperatures in Calgary the past few weeks — allowing the public to enjoy the outdoors amid provincewide COVID-19 restrictions.

On Wednesday, temperatures in the city were forecast to stay near zero, but on Friday a high of 6 C is expected.

Calgarians were surprised by the “mini-hurricane-like winds.”

One Twitter user compared the stormy conditions to what it’s like to be in Waterton Lakes National Park, where strong winds are a regular occurrence.

As well, Brian Kannekens tweeted that people should avoid travel.

“Tried to go to Calgary. No go. Turned around just west of redcliff. No sense risking. Between wind and rain pretty treacherous. Don’t travel if you don’t need to,” he said.