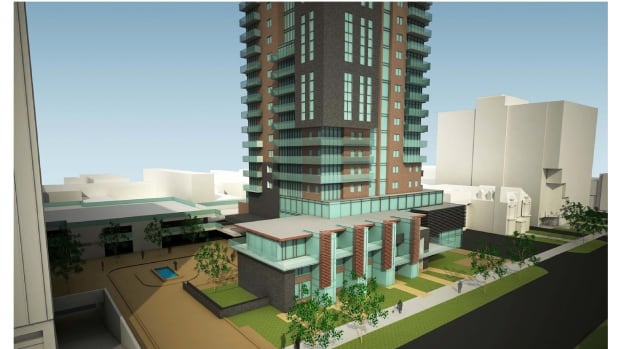 Back in 2012, London landlord Shmuel Farhi submitted a request to the city, seeking permission to demolish a heritage-listed building on his property at 199 Queens Ave.

The two-storey building was tenanted with a hair salon and in his submission to city council, Farhi said removing the building would clear the way for development on Queens Avenue, west of Clarence Street.

In his letter addressed to then mayor Joe Fontana and council, Farhi said neglect and piecemeal renovations by previous owners had left the building with little heritage value. He estimated it would cost $289,000 to make it compliant with modern building codes.

“Could 199 Queens Ave. be made handicapped-accessible? Not at a price that would allow it to be subsequently rented,” wrote Farhi. “The math just doesn’t work.”

‘We could see a phoenix rise’

From there, Farhi’s submission laid out a plan to redevelop the site if the demolition was approved.

“A much more productive and useful solution would be to take the building down and construct an attractive new, multipurpose structure,” wrote Farhi. “I am prepared to do so.”

In his submission, Farhi said he was working with architect Tillmann Ruth to design a “multi-use, multi-storey building with two levels of underground parking, street-level retail, four additional levels of above-ground parking, and multiple floors of quality residential units on top of that.

“The good news is that we could see a phoenix rise from its demolition,” wrote Farhi.

Part of the plan involved Farhi buying an adjacent, city-owned parking lot at 185 Queens Ave. “providing us with a footprint large enough to accommodate our vision of this very attractive addition to London’s downtown,” he wrote.

Tom Tillmann confirmed to CBC News Monday that his company did design a 33-storey mixed-use (residential and retail) building for the site, and that the project would require 185 Queens Ave. to reach its full potential.

A staff report about the Queen’s Avenue demolition request said it would be better to hold the landowner to a redevelopment plan before allowing the demolition. However, the report also said that couldn’t happen unless the building received full heritage designation, something staff was not recommending.

As for Farhi’s interest in buying 185 Queens Ave, the staff report said the “unsolicited purchase offer” is outside of the city’s standard process for selling land. The property must be declared surplus followed by an open bidding process to ensure a fair market price.

Regardless of whether Farhi’s move to buy 185 Queens Ave. was the sticking point, nine years later the phoenix he talked about in his letter has yet to rise

Today, the building that housed the hair salon is gone and the property continues to operate as a surface parking lot.

And while little has changed in that block of Queen’s Ave since 2012, the entire episode has not been forgotten.

‘A bit of bait and switch’

The property was discussed at city council last September when Farhi requested another demolition permit for a different downtown property he owns: 120 York St.

Farhi Holdings Corp. president Jim Bujouves told the committee the company has “every intention” of developing the site in the long-term, but said the immediate plan was to operate it as a surface parking lot. A staff report recommended the demolition be approved, saying the building had no heritage value.

That’s when Coun. Stephen Turner reminded council about what happened at 199 Queens Ave.

“We’ve been down this path a few times before,” said Turner in an interview with CBC News last week. “A property owner says ‘I’m going to tear a building down to make something even bigger and grander,’ and then that never happens, whatever the reason is.

“It happens too often, it’s a bit of a bait and switch and I don’t think council should have any tolerance for it.”

Turner said the city shouldn’t issue demolition permits to downtown property owners unless there’s an agreement holding the landowner to build on the site. He pointed to the London Plan, which advises against adding surface parking in the core.

The demolition permit for 120 York St. passed at council, the building is gone and the lot will soon be open for parking.

As for the city-owned parking lot at 185 Queens Ave. that Farhi wanted to buy nine years ago when his building was approved for demolition, it is again in front of council.

In 2019, the city issued a request for proposals from private developers to turn 185 Queens Ave. into a mixed-use development that will include a municipal parking garage.

Farhi Holdings was one of three companies to submit a bid but then the city cancelled the process due to the pandemic. Details about the bids remain sealed.

Turner said he raised what happened with 199 Queens Ave as a cautionary tale, to remind council to hold developers accountable.

“Downtown is the engine of our city,” he said. “We’ve put a lot of investment as a municipal government into revitalizing the core. When buildings are torn down and sit empty as a parking lot, that undermines our efforts.”

Tillmann said Farhi Holdings is hopeful that after the pandemic, the city will approve their bid for the adjacent parking lot, allowing their design to be built.