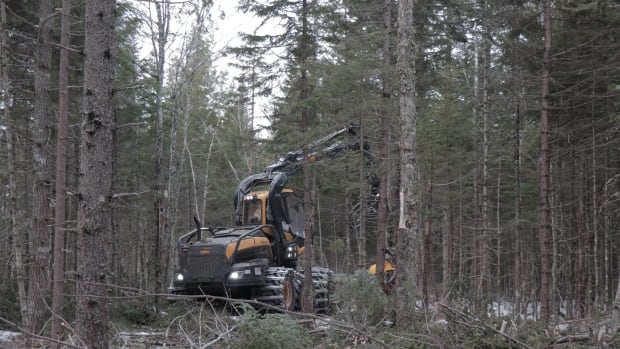 Northern Pulp might not be operating right now, but the province’s Lands and Forestry minister says harvesting continues to happen at pre-shutdown levels because sawmills have the same demand for studwood and sawlogs that they did before the Pictou County pulp mill shut down.

When Northern Pulp closed at the end of January after failing to secure environmental approval to build a new effluent treatment facility, some observers believed it would lead to a decrease in the number of trees being cut at a time when the government had promised a reduction in clearcutting.

To date, neither has happened.

In an interview Wednesday, Lands and Forestry Minister Iain Rankin said Northern Pulp’s access to Crown land and volumes was renewed in August for another year because sawmills still need supply.

It also means the sector is able to retain the skill and expertise of the people working in the woods, said Rankin.

“They have the competencies and already have plans in place to be able to conduct the harvest,” he said.

“It’s about maintaining the supply chain. All those workers that have been harvesting can continue to do so and it allows for a seamless transition for the sawmills to continue to get the comparable percentage of allocation that they have been getting historically.”

Part of the equation from that arrangement in the past meant that after sawmills cut logs, the byproducts would go back to Northern Pulp to be used to make pulp. Annually, the mill would process about 1.2 million tonnes of wood chips.

Some sawmills, such as Elmsdale Lumber and Ledwidge Lumber, have been able to find new customers for their chips, albeit at reduced rates. Right now those losses are offset by the boom in lumber prices.

But Ray Plourde of the Ecology Action Centre said that still raises questions about why so much wood needs to be cut. He’s concerned the department cannot say how much wood chips are leaving the province right now, because there clearly isn’t a market for them here in Nova Scotia.

For mills to send primary products, such as logs, out of the province, they require permission from the department. That approval can be revoked if new markets emerge in Nova Scotia.

No firm has permission at this time to send softwood pulpwood logs out of the province, according to a department spokesperson. However, byproducts from sawing logs are considered a secondary product and, as such, don’t require permission to be sent out of Nova Scotia. As a result, the department cannot say how much, if any, is leaving the province and where it is headed.

For Plourde, that’s a problem.

“The notion that they can tell us how much hardwood pulp is going out, but they can’t tell us [how much] softwood chips — that’s ridiculous. That’s really like, literally, turning a blind eye.”

The solution is to implement the recommendations of the Lahey Report as soon as possible, which would lead to a more sustainable approach to forestry, said Plourde. He’s frustrated that still hasn’t happened two years after the report’s release.

“It appears that there’s a run on the woods to try to get at all the best mixed wood stands, older forests, anything that has quality trees and to cut them down as quickly as possible before there are new regulations brought in, and using the same old terrible clearcutting methods,” he said.

A linchpin of making that change is a new forest management guide. Its introduction is delayed. Rankin said the next draft is being finalized and will soon go to his ministerial advisory committee, of which Plourde is a member. Rankin pledged the guide would be public by the end of the year.

“That’s where you’ll see a dramatic shift in forestry practices at the stand level” with a greater emphasis on partial harvests, he said.

Meanwhile, Rankin and his department officials remain focused on trying to diversify the industry and help find new markets. He’s confident that by next July, there will be new options for the industry beyond simply renewing access for Northern Pulp

Six district heating projects are almost complete and an update will come within the next two weeks, said Rankin. He and staff continue to have virtual trade missions to explore new export opportunities in places such as Maine, Sweden and Finland, and Rankin said he’s encouraged that 22 applications were recently received for the first round of access to the $50-million forestry innovation transition trust.

“We’ve been looking at ways to drive what is known as the bioeconomy and have more innovation to utilize that byproduct,” he said. “That takes some time, it takes capital investment for the different applicants to make.”