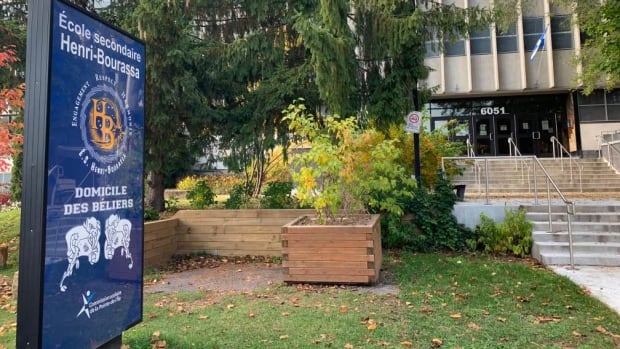 The Pointe-de-l’Île service centre overseeing Henri-Bourassa high school, where a teacher was suspended after a video of him repeatedly saying the N-word surfaced, says it wants to create lasting change.

On top of the current investigation into history teacher Vincent Ouellette’s actions, the service centre says it is updating its code of ethics, which applies to all of the centre’s employees.

It says it will also be making its formal complaint process easier to understand and access.

In a statement, the service centre said it was committing to providing a safe, respectful and caring environment for all students, regardless of their gender, abilities, culture, sexual orientation or religious beliefs.”

“This is a huge responsibility, which all of our employees must take very seriously,” El-Khoury said in the statement.

After the video surfaced last week, several other students and former students at Henri-Bourassa have come forward with complaints about Ouellette’s behaviour, including allegations that he regularly made Islamophobic comments and would jokingly do Nazi salutes.

Many of them claimed they made complaints to high school administrators but say they were ignored.

“Every day, we witness fruitful and empathetic exchanges between the various members of our educational community and we are proud of it.”

The service centre’s statement comes a day after the trustee of the English Montreal School Board, Marlene Jennings, delivered a powerful speech at this week’s board meeting after a textbook in use at several high schools was found to contain the N-word.

“When I hear or see that word, I am filled with such pain because I know what my ancestors lived through as slaves,” Jennings, who is Black, told the board Wednesday.