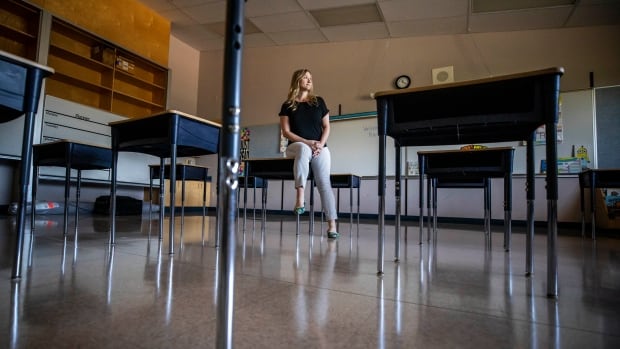 Local teachers’ and education unions are joining calls from others in the province to vaccinate teachers sooner than is currently planned.

“Our role is essential, plain and simple,” says Jeff Pelich, vice president with the Elementary Teachers Federation of Ontario in Waterloo region. He’s also the parent of a Grade 7 student and his partner is a teacher.

“We agree, actually, with the government that schools should remain open. That brick and mortar schools are the best. There is no substitute for that,” Pelich said. “But it needs to be safe.

“Keeping schools open makes little sense when people are not protected appropriately and one easy way to address that is to make education workers essential workers and vaccinate them as soon as possible.”

Teachers are in the Phase 2 part of the provincial vaccination rollout, but are lower priority than older adults, people in specific hot spots as identified by the province and people with high-risk health conditions.

Patrick Etmanski, president of Ontario English Catholic Teachers’ Association Waterloo, says he thinks anyone who deals with the public should be vaccinated.

“There’s a lot of frontline workers out there that should be vaccinated, those people in the grocery stores, for goodness sake,” he said. “Teachers need to be shoulder to shoulder with those other folks who are at the front of the line.”

Rob Gascho says the policy should be “virtual till vaccinated.”

The Ontario Secondary School Teachers Federation district 24 president said his union believes in-person learning “is by far better for students; however, schools must be safe.”

“We have been calling for other safety measures such as smaller classes, better ventilation and so on, but much of this has been ignored or obscured in a fog of talking points and misleading statistics from the minister of education and the premier,” Gascho said.

Etmanski says in high schools, students aren’t screened for COVID-19 symptoms until they’re in the classroom. They can walk in the hallways, visit their lockers and go to other parts of the school before they’re checked.

“Why not check them at the front door?” he said.

He said in elementary school students come to school sick because their parents have to work.

“They’re coming to school with symptoms. They absolutely are. And I mean, the schools are kind of at a loss as to what to do with them because they can’t even really send them home because there’s nobody there,” he said.

Rollout based on age, risk

Niagara region expects to vaccinate staff starting this weekend, but rollout across the rest of the province is unclear.

An online petition on the website Change.org has more than 68,000 signatures of people supporting a call for teachers and education staff to be vaccinated.

When asked about shots for school staff during a provincial update Tuesday afternoon, Premier Doug Ford and Minister of Health Christine Elliott said Ontario will continue to prioritize vaccine rollout based on age and risk.

Pelich was part of a virtual press conference on Tuesday with NDP Leader Andrea Horwath to talk about education and how the COVID-19 pandemic has been affecting schools in Waterloo region.

Horwath says the province should take advantage of the April break next week.

“The government can use that opportunity to do what they should have done in the summer in preparation for the fall which is things like, bring those class sizes down, put caps on class sizes,” Horwath said.

She added the province should be working through the break to improve ventilation systems, ensure windows can open in classrooms and put in a more rigorous testing system to catch cases of the virus.

“There’s just so much that can be done,” she said.