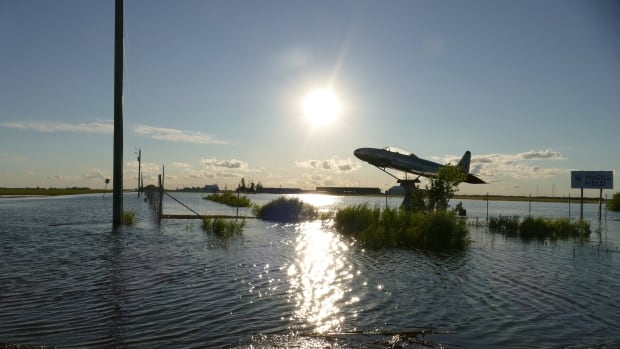 Although water levels have dropped below the flood stage in Brandon, Man., the city says it’s still on active alert in case of flash flooding following a deluge of rain last week.

Water levels in the Rivers Reservoir had dropped about 15 centimetres in 24 hours as of Tuesday morning. However, they’re still higher than the spillway and are historically high, according to a City of Brandon news release.

Meanwhile, the level of the Assiniboine River in Brandon has dropped more than a metre since last week and is now in its banks and below flood stage as of Tuesday morning, the city says.

“At this point, the level of risk is lessening but has not been eliminated,” said Brian Kayes, the director of risk and emergency management for the City of Brandon in a video message to residents.

That’s because the Little Saskatchewan River, which flows into the Assiniboine just west of Brandon, is still at flood stage because of additional rain and runoff.

There are also some concerns of possible flash flooding near Brandon.

People forced to evacuate their homes or businesses last week should be ready to leave again on short notice should an order be given, Kayes says.

“We understand the stress this places on everyone, but see little opportunity at this time to lessen the call for readiness,” he said.

Hundreds of homes and businesses in the city suffered water damage, including the Sportsplex, City Hall and the airport.

The city says it’s confident the dike system in the area is hardy enough to withstand a surge of water caused by potential flash floods, and that it’s planned for a worst-case scenario.

However, Brandon’s emergency response control group is remaining on active alert and is monitoring local dikes and water systems regularly.