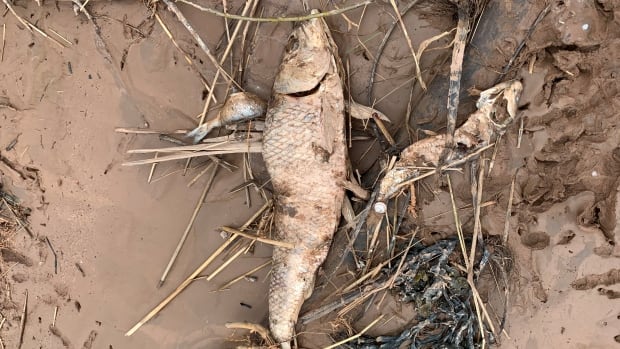 Dead striped bass, gaspereau and even an Atlantic salmon were found over a two-kilometre stretch of the Shubenacadie River in central Nova Scotia on Monday.

Alanna Syilboy, with the Mi’kmaw Conservation Group, walked the river and said hundreds of fish died.

“You know, I grew up near that river my entire life and I’ve never heard or seen anything like this happen,” she said.

Syliboy said there was no obvious cause of death, but doesn’t think anyone is to blame.

“I believe that our rise in air temperature and low water levels at the tide being out is not creating an ideal habitat for any species of fish,” she said.

It’s unknown if they were new deaths or washed back in by the tides.

Syliboy said the Department of Fisheries and Oceans collected the salmon specimen on Monday.

The department issued a brief statement to CBC News.

“DFO staff were notified of a mortality event affecting various fish species in the Shubenacadie River area. DFO is continuing to investigate the potential causes of the event,” spokesperson Alexandra McNab said in an email.

Late last month, thousands of gaspereau died in the Avon River at Windsor when they were stranded in shallow pools during warm weather.