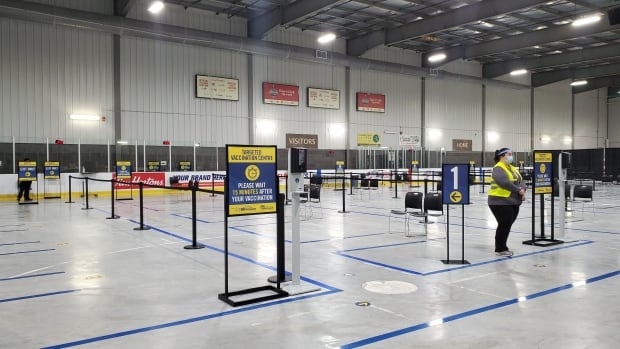 COVID-19 vaccine appointments are now available for those 50 and up in hotspot neighbourhoods in Windsor-Essex, but it remains unclear when eligibility could expand beyond that age group — despite a recent announcement from the province.

As of Thursday, anyone who meets the age criteria and lives in one of seven postal codes — N8X, N8Y, N9A, N9B, N9C, N8H, or N9Y — can book an appointment or attend a mass vaccination clinic on the health unit’s website or by calling.

They must provide ID with their address or a bill in order to prove they live in one of the eligible areas.

On Wednesday, the province announced plans to extend vaccine eligibility to all of those 18 and older in designated COVID-19 hotspots in 13 public health units across the province, offering the shots through mobile clinics and pop-up sites.

Locally, residents in the seven hard-hit postal codes will be eligible for vaccines when supply allows, according to the provincial government.

Theresa Marentette, CEO of the Windsor-Essex County Health Unit, said that the ministry of health has not yet provided direction on the plan to vaccinate younger residents of those areas.

“If there is further direction regarding a different age group, then we will have to look at that. But the information I have is 50-plus at this time,” she said at the health unit’s daily briefing on Thursday.

Dr. Wajid Ahmed, medical officer of health, said there are currently no plans for pop up or mobile clinics to target the hot spots.

Marentette and Ahmed said they haven’t heard about any changes to the region’s vaccine allotment that would allow them to administer shots to more people.

“Whatever we are doing, the vaccine supply is still the same,” Ahmed said.

The health unit also announced 39 new cases of the virus. Of the new cases, 11 are close contacts of cases that were previously identified, eight cases were community acquired,  and a further 20 are under investigation

There are 393 cases active overall. Since February, 198 confirmed or preliminary cases involving more contagious variants of concern have been identified.

There are 17 people in hospital with COVID-19, including five in intensive care.

Over 108,00 doses of COVID-19 vaccine have been administered to date, and 98,879 people have received at least one dose

There are six ongoing outbreaks, including one newly announced at St. Peter Catholic School that involves a variant of concern. The Tecumseh school has four active student cases in a class cohort that was dismissed on April 4, the Windsor-Essex Catholic District School Board said in a news release Wednesday.

One of the outbreaks, at an agriculture business in Kingsville, involves the B117 variant of concern, which originated in the U.K.

Ahmed said the case hasn’t resulted in any major spread. He said the health unit is working with farms to ensure that precautions are in place to protect temporary foreign workers.

“Every time when we have a case we act immediately to contain it. So far it’s been working,” he said.

The other two outbreaks are occurring in manufacturing settings in Windsor and Lakeshore.

COVID-19 in Sarnia and Chatham-Kent

There were 15 new cases of COVID-19 reported within Lambton County, and 119 are active overall.

Chatham-Kent Public Health  reported an increase of one new case. There are 56 cases considered active.