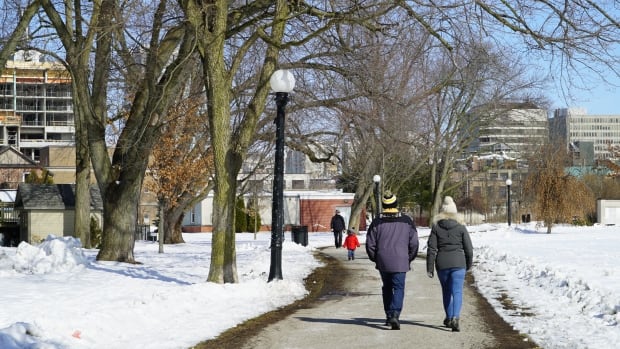 Up to 20 centimetres of snow is expected in Waterloo Region between Monday and Tuesday, Environment Canada says.

Meteorologist Henry Fung said there will be rain on Monday, transitioning to snow in the late afternoon.

But he said since the ground will be still “kind of warm,” the snow probably won’t accumulate until the evening, with up to five centimetres expected Monday night.

“Tuesday will be more snow, in the five to 10 centimetre range,” Fung told CBC Kitchener-Waterloo. “On Tuesday night it will calm down a little but there will still be flurries and maybe some accumulations of snow.

“So the total will be like 10 to 20 centimetres between Monday and Tuesday,” Fung added.

He said things will calm down after Tuesday but it will still be cool and breezy.

Monday’s temperature is forecasted to be 2 C, while the forecast for Tuesday calls for a temperature of 1 C.