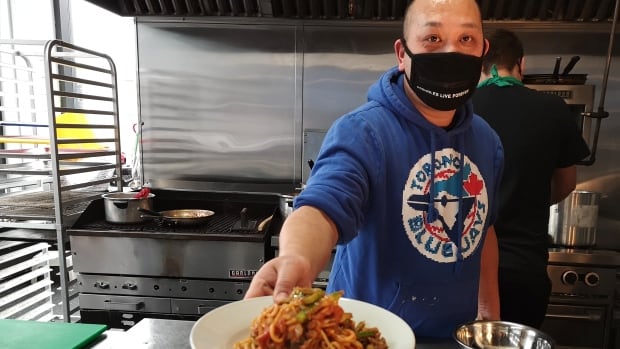 You can detect an element of the social activist in Arnold Yescas, only 26 years old but already a 10-year veteran of the cooking industry, as he talks about the Underground Flavour Group (UFG).

Yescas founded UFG a couple of years ago and recently started operating it out of the former Gilt Restaurant location in downtown Kitchener. The concept is a kitchen based on diversity.

The demands of the industry include long hours and hot, physical work – work that was sometimes dangerous, even before cooks became frontline workers in the current pandemic milieu.

“We are trying to revolutionize the culinary industry, because the way we work with the UFG platform allows chefs to create their own schedules, create their own cuisines and pretty much what works best with them,” Yescas says.

He was inspired to launch the concept while cooking at an upscale-casual restaurant in Kitchener. Yescas says UFG is about giving space – and a platform for self-expression – to cooks.

Yescas trained formally in the culinary arts at downtown Kitchener’s St. Louis education facility and at Fanshawe College. Before moving to Del’s Enoteca and Loloan Lobby Bar he was sous chef at Gilt.

Now, what the location hosts is not exactly a ghost or “shadow” kitchen — these days, that’s the name for a restaurant without a dining room, a delivery-only operation, or a food production space shared by several brands. UFG is trying out a different model.

The collective promotes who is cooking and what they are serving and communicates a very clear sense of identity for each cook — the UFG calendar for the public breaks down into a series of days and times with different food operators, both local and from outside the region.

The visiting cooks and UFG share revenue from pop-up lunches and from bar and snack evenings, with some nights reserved for a dinner series featuring different chefs. The menus change regularly. The dining room is accepting reservations for up to 10 people.

There’s a lounge and bar area front-of-house and a small market of goods from local businesses; UFG collaborates with bakeries, food trucks and other food establishments.

Those, however, are the administrative details. The big idea is that UFG gives cooks a platform for expressing themselves when otherwise they would be cooking what they are tasked to cook in someone else’s restaurant – and often in someone else’s culture: that’s the nature of the business.

In describing the few opportunities cooks have to cook for themselves and share that food with customers – “cooking from their cuisine,” he calls it – Yescas, who has a Nicaraguan background, draws inspiration from hip hop, the hugely influential music form, identifying with the expression of cultures that hip-hop artists embody.

“They are musicians who do things how they want and when they want. They create their own culture, and that’s exactly what we’re trying to do with these chefs and the freedom of their own culture and cuisine.”

There’s a lot of diversity in Waterloo Region and many different food cultures, Yescas says. “What we do is bring these diverse cultures and these chefs together and enjoy the various cuisines out of one location. It’s an amazing experience.”

Even with the combined energies and passion of Yescas and the coterie of cooks who have joined him, a venture like UFG isn’t likely to effect significant change in the difficulties of the hospitality industry.

But Yescas believes the concept can ameliorate, at least for a moment, the conditions in which his cooks operate and, at the same time, introduce the community to wonderful foods and flavours.

UFG is a vehicle that gives cooks, who traditionally toil behind the scenes, a voice. It offers them autonomy and a chance to take centre stage.

“They can cook around their lifestyle, their family and kids and other jobs while sharing their food,” Yescas says. “It’s so we can build community.”