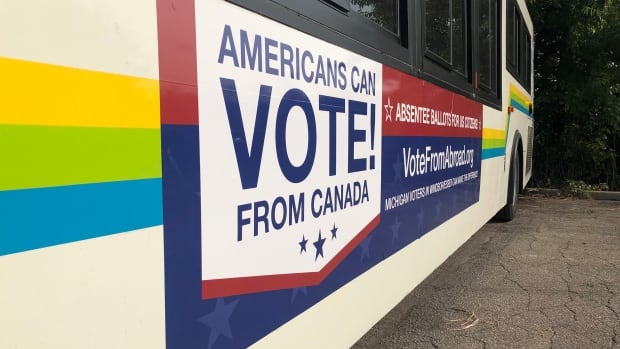 U.S. Democrats hope the large number of Michiganders across Canada and particularly in southwestern Ontario can help flip the state blue in the upcoming U.S. election.

“We believe if we can rally them and secure their votes that they can truly contribute to making a difference,” said Steve Nardi of Democrats Abroad Canada.

Democrats lost the state by around 10,000 votes during the 2016 race. This time around, CBC’s Presidential Poll Tracker shows Michigan as leaning Democrat with just over 51 per cent voting for Democratic Nominee Joe Biden versus 44 per cent for President Donald Trump, but Nardi is telling people on this side of the border not to trust the polls and to exercise their right to vote from abroad.

The organization is putting ads on some Windsor busses and in newspapers and are also looking at radio advertising in Windsor, Sarnia and the Sault Ste. Marie markets.

“Just to really try to hone in on the Michiganders because that’s where we understand the largest percentage of them are,” Nardi said.

According to a 2016 report done by the United States Department of Defense’s Federal Voting Assistance Program, there were over 600,000 people residing in Canada eligible to vote in the U.S. election, but less than six per cent of them did.

Nardi said that while it’s hard to gauge exactly how many more people might be requesting ballots this time around, they are seeing an increase in traffic on their site.

As Americans living in Canada, many of us often have a direct impact about what happens with the U.S. elections on our lives, on our families,– Laura Gusba, U.S. voter in Canada

“We’re seeing about a five per cent increase when we’ve only been at this, concentrating on Windsor, for about the last two and a half weeks.”

Alex Andres Lugo’s home state is Michigan. This is the first time he’s voted from Canada but he spent some time in the U.S. military and so has some experience with voting abroad but this time around, things are a somewhat different.

With the border closed to just essential traffic, Lugo said he is stuck using the mail. He is still waiting for his ballot to arrive but he plans to get it back as soon as he can.

“This is not something new to me but there is a lot of concern now because of all the new regulations and how they’re trying to impede voting by mail,” Lugo said.

Lugo, who identifies as a Libertarian and has no affiliation to either the Democrats or the Republicans, said he plans to vote for Biden this time around — when asked if he thinks the Americans in Canada vote would make a difference, he said in this election, every vote will.

“A lot of people were apathetic to the whole voting process and who they were voting for in the last election and I think that’s what caused the current situation we’re in and I think that apathy has changed,” Lugo said.

“I think the numbers in this election are going to be very, very impressive.”

I think it would make a difference… especially in this city, there’s a lot of people living here from the United States,– Christina Bertolissio, U.S. voter in Canada

Laura Gusba also is unaffiliated with either party but she said her philosophy falls more in line with the Democratic party. She is a health-care provider who lives on this side of the border but crosses to Detroit each day for her job.

“As a health-care provider and observing what things have been going on over the last number of years, I’m pretty solidly in the Democratic camp,” she said.

She said she’s uncertain how much of a dent voters in Canada could make in the Michigan race but it is still important for them to take part.

“As Americans living in Canada, many of us often have a direct impact about what happens with the U.S. elections on our lives, on our families,” she said.

Christina Bertolissio, who said she’s “ridin’ with Biden” lives in Windsor, believes it is important for Americans like her, on this side of the border, to cast their ballots.

“I think it would make a difference… especially in this city, there’s a lot of people living here from the United States.”