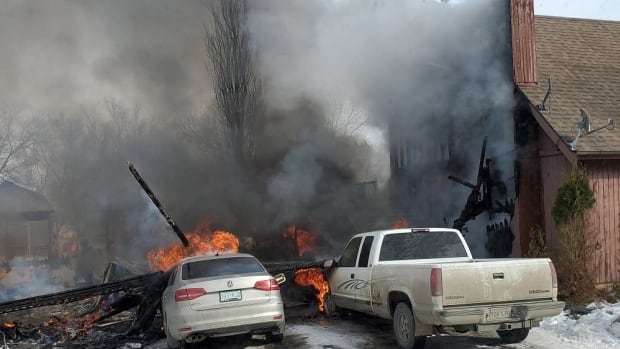 Two people were injured and a pet was killed in a house fire in the rural municipality of Corman Park, on the outskirts of Saskatoon.

The fire broke out Monday afternoon on Dalmeny Road just after 1 p.m., according to the Saskatoon fire department.

Three engines, one rescue unit, a brush truck and a tanker were sent to the scene. When they arrived, the garage was fully engulfed in flames. The fire department said that the fire had spread to the attached house.

Two people were taken to hospital with minor injuries.

A dog died, and a cat was resuscitated with the Saskatoon Fire Department rescue unit’s pet mask.

The department said the fire was brought under control just after 2 p.m.

The damage is estimated to be at $200,000. The cause of the fire has not been released to the public.