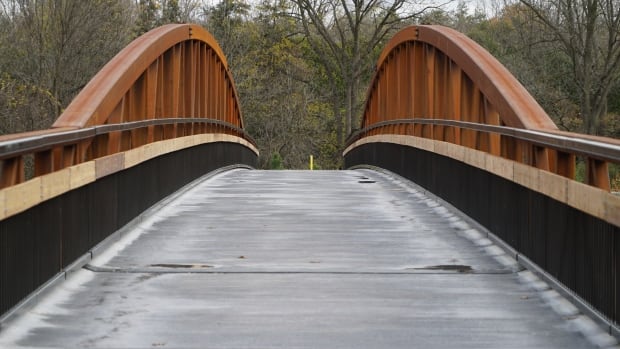 A set of new pedestrian and cycling bridges spanning the Thames River are set to open late Friday, linking the Western University area to the North London Athletic Fields, a city-run outdoor sport facility in the Adelaide St. and Kipps Lane.

The $6.3 million bridge was paid for by city hall with the help of a $4-million grant from the federal and provincial governments through the Federal Gas Tax Fund.

“Our government was proud to contribute to the project of building two new pedestrian bridges across the Thames River,” Kate Young, the Liberal MP London West said in a city hall news release published Friday.

“These projects ensure that citizens and visitors alike, have a safe and accessible way to enjoy the beautiful green spaces in The Forest City.”

Curious cyclists gathered at the foot of the western bridge in Ross Park Friday before its official opening, looking through the holes in a large orange construction fence to get a first look at the new structure straddling the river.

“This new link in the cycling network connects more than 50,000 Londoners to nearby destinations along the TVP like Western University and our downtown,” London Mayor Ed Holder said in the release.

Each bridge is 100 metres long and connects multi-use paths through Ross Park off Richmond Street in the west to the North London Athletic Fields, located at Adelaide St. and Kipps Lane in the east.

City officials said Friday that the bridges will be open late in the day, they’ll be ready for use by cyclists and pedestrians this weekend.