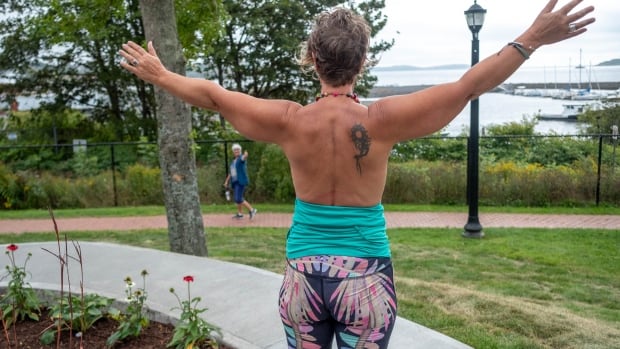 When Christina Belding strutted down Rainbow Haven beach for a CBC News story this summer — in only a bikini bottom — she rocked a confident gaze, six-pack abs, and a flat chest with two surgical scars.

Little did the 52-year-old know that her breast cancer journey and her decision to go flat-chested would inspire people around the world.

For her, cancer has had a silver lining.

“There is life after your breasts. You don’t need breasts to feel any more feminine or to be a woman, that you can still look fine and great however you want to be,” she said.

Jana Reddick, a cancer survivor from Glace Bay, N.S., saw the story pop up on her phone and did a double take at the photo. She’s badass, Reddick thought to herself.

It takes one to know one.

Reddick found a lump in her left breast by herself. By the time cancer was diagnosed, it was fast-growing and threatening her life. She lost her breast last year at the age of 28.

A self-described tomboy, Reddick felt no sadness to lose a breast. She even likes the radiation burn that darkened a patch of skin. As a light-skinned Black woman, her “Blackness” is coming out, she said.

In July, she hiked to a swimming hole in Cape Breton — topless. She stuck a bandage on the nipple of her good breast, but her scarred chest attracted uncomfortable stares.

Then along came Belding. Her story gave Reddick permission to show off her mastectomy.

“When I saw that people were sharing her story all over the place, I definitely felt like I could go anywhere to do it,” said Reddick.

Now, she’s gone swimming, driving, and even done yard work, without a care.

“I’ve just been flying, like I don’t know, ever since cancer,” said Reddick.

Their stories about cancer’s silver lining isn’t what Sarah Nersesian, a Dalhousie University PhD student, has seen much.

She’s devoted her life to women’s cancer research and enhancing a survivor’s quality of life. Breast cancer has touched her family and she knows the ugly side of the disease.

As she read Belding’s comfort with her new body, she wanted to connect because “this is exactly what women who are going through this process need.”

An estimated 1,960 women will be diagnosed with breast cancer in Atlantic Canada this year, according to the Canadian Cancer Society.

Whether a patient has her breasts conserved, reconstructed or goes flat-chested after a mastectomy, empowering her to make a treatment choice is important for mental health, Nersesian said. Poor body image can contribute to depression and anxiety.

Now, through the outlook of these survivors, she’s seeing a new side of cancer for the first time.

“I think it provides me a sense of hope that survivorship in the future might look different than how it did in the past,” she said. “I don’t think I’ve seen a lot of the good that can come from a surgery like this.”

The three women recently met at a garden in Dartmouth, N.S., devoted to cancer survivors.

Belding and Reddick casually took their tops off and posed for Nersesian, who’s also an artist and owner of Designs that Cell, a scientific illustration company.

But this time they weren’t walking along the water’s edge or hiking in a forest. They were in the middle of downtown Dartmouth.

Sitting back to back, their skin touching, their mastectomies revealed, they each draped an arm on a bench engraved with an inspirational message, literally embracing the words.

They shared stories about how they bid farewell to the part of their body that tried to kill them, as Nersesian sketched on her tablet.

Belding recalled how she made a video on a beach in Barbados to show her surgeon how much she treasured her “girls.”

“I did tell him I was planning on going to the beach and to do a really nice job because if you want more customers,” she said. Now she jokes about how “the boobs took an early retirement.”

Reddick let out a big laugh. She, too, had gone on a trip — she went to London to see the Spice Girls.

Belding dubbed it the break-up trip for Reddick’s twins.

Passersby gave them a thumbs-up. A cyclist with a dog in a backpack rang a bell. Two women stayed for a while and cheered them on.

To have inspired others in their cancer journey has been another silver lining, said Belding.

Nersesian illustrated the scene she was drawn to: bosomless buddies, rejoicing.

“I think bringing something beautiful and colourful to a disease that’s really horrible is a nice spin on things,” she said.

As Belding stretched her arms wide, her chest open to the sky, Reddick flexed her biceps like a wrestler in a ring. They shouted woo hoos and smiled wide. Cancer had taken their breasts, but not their strength.

“We’ve come closer to death than most people would ever like to,” said Reddick.

“I feel like maybe with that, we kind of know how to live a little bit better.”