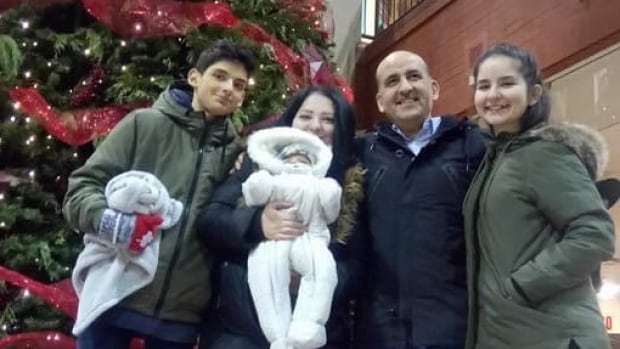 The City of Saint John has reversed a ticket after a parking commissionaire told a business owner to come back when she learned English and ticketed her $100.

Yamama Zein Alabdin was parked in a loading zone and was unloading supplies Monday morning. She was inside her restaurant Mashawi Zein on Germain Street when her son told her the car was being ticketed.

Once outside, she told the commissionaire she was unloading supplies for her business and she would move her car once she was done with an inspection happening at her restaurant.

Zein Alabdin’s first language is Arabic, but she’s learning both English and French and tried to communicate with him using both languages. He continued writing the ticket.

“I told him that we have a company here that’s doing an inspection, ‘I’m busy, just give me a second, my English is not so good,'” she said in an interview in Arabic.

“He said when you learn English come back to talk to me.”

Zein Alabdin said at the end of the encounter, she was crying.

“He just spoke to me in a humiliating way,” she said. “He embarrassed me.”

She said there were many people around, and another car parked in a loading zone with two women inside. She said he treated them with more respect than he treated her.

“He just waved them away. Is it just because I’m Arab? Honestly, that’s what went through my mind,” she said. “I immediately took it in a racist way.”

It sounds by all accounts here, the treatment was completely unacceptable.– Don Darling, mayor

Mishelle Carson-Roy, the co-owner of a store across the street, said she was nearby and heard the commissionaire say those words. She said she was shocked.

“I didn’t want to believe that that’s what I had heard,” she said.

Carson-Roy wrote a letter to send to the city, but the website is still down because of a cyberattack. So she posted the letter on Twitter instead, garnering multiple shares and a reply from the mayor.

No place for racism, mayor says

Mayor Don Darling said the city is investigating. Darling didn’t say what will happen to the commissionaire but said the city does not tolerate racist behaviour by employees.

“We’re just really disappointed in what I read because there’s no place for it anywhere, let alone in our city,” he said.

Darling said personal vehicles can’t be parked in loading zones even if they’re being used for business purposes, but that was irrelevant to the treatment Zein Alabdin received.

“We’re still investigating that, but it sounds by all accounts here, the treatment was completely unacceptable,” he said. “The fact that they may or may not have used a loading zone appropriately is a separate conversation.”

However, he said, this encounter shows the bylaws should be reviewed, and this could have been a learning opportunity.

“Chalking it up to an education moment with kindness and patience, and I think all of this could have been avoided,” he said.

He hurt me but I want peace. I want to face harm with forgiveness.– Yamama Zein Alabdin, business owner

Zein Alabdin came to Canada with her family as Syrian refugees five years ago. She said she owns two businesses, the restaurant  on Germain and a café on Water Street, and has three children.

She wasn’t expecting her encounter would get this much attention. She got a call from city hall, telling her the ticket has been struck down.

What the commissionaire said hurt her, she said, but she doesn’t want to see him punished.

“I don’t want anyone suffer because of me. What happened was shared everywhere but I don’t want him to be hurt by this,” she said. “I came to Canada in search of safety, and I don’t want to see anyone be harmed.”

She said she forgives him.

“He hurt me but I want peace. I want to face harm with forgiveness.

“No matter my background, in the end we all live in the same place and are seeking safety and peace.”