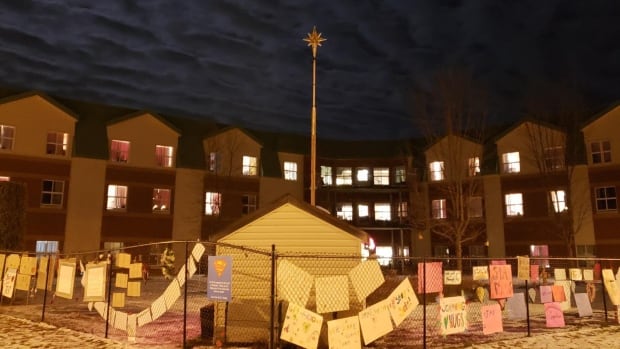 People in Thunder Bay Ont. are rallying behind Southbridge Roseview long-term care home, where an outbreak of COVID-19 has spread to over 30 residents and 15 staff members, and has claimed two lives.

The outbreak is the largest the city has seen since the pandemic began in March, sparking concern and a large show of support for the people inside the facility.

“We were discussing how we felt worried and sad and scared for all the residents and staff, and my son, Jack, said he wanted to do something to show the residents that he cares. So we decided that we were going to make signs for the residents and staff and put them out on their fences for them to see,” explained Patrica Maunu, who has volunteered at the home with her family for over two years.

At the request of her son, Maunu and her sister Amy Aldrige, who also has a connection to the home, they organized decorating the property of Southbridge Roseview when the news came out about the outbreak.

The family set out with homemade signs and Christmas decorations to attach to trees and a fence along the property of the home. Maunu said her family wanted to provide a source of joy for all the residents, and wanted to show their appreciation for the frontline workers at the facility.

“Honestly, putting them up on the fences, there were so many staff and residents that were waving from the windows. It was actually really emotional to see everybody in there and you just want them to know that you see them and you love them,” said Maunu.

Since Maunu and Aldrige put out a call on social media for city residents to join in on the initiative, the outdoor display has grown to encompass more words of encouragement, flowers, teddy bears, Christmas decorations and hand drawn pictures.

Maunu said the response and outpouring of support for Southbridge Roseview has been “beautiful” and estimates over 100 signs have been added to the fence outside the facility.

“I think that it shows that our community can band together and our community … has such a big heart. We asked the community to show up for Roseview and they showed up so big. It just makes my heart feel so incredibly happy,” she said.

Schools in the community have also added to the display, including a grade two class from Ecole Gron Morgan Public School.

The class drew up signs as part of a kindness project the group had been working on, then their teacher laminated and posted the signs outside of the facility.

“COVID-19 gets brought up in discussions, and we just try to address it with the kids in a way that is age appropriate, but also allowing them to express how they’re feeling,” said Whitney Lundstrom, the grade-two teacher, explaining that a student had brought up the news of the outbreak in class one day.

“So we had come up with the idea of perhaps making signs to encourage the residents and the staff there, because we all are really in this together,” she said.

Students came up with their own messages of positivity and encouragement and wrote them out in both French and English for the residents and staff to see.

“You are special and you are loved,” reads a sign made by a student.

Lundstrom said the exercise helped the class to think about their feelings and was also an opportunity for the students to feel connected to the community in a new way.

She said normally classes could make visits to long-term care homes, especially during the holiday season. However, visits for things like Christmas concerts will not be a reality this year due the pandemic.

“My grandmother lives at one of the old age homes in Thunder Bay, and we went to visit her and some friends and we performed talent and we did all that. So to me, I guess, shifting my thinking this year about how we can have that outreach … this is why we did these signs,” said Lundstrom.