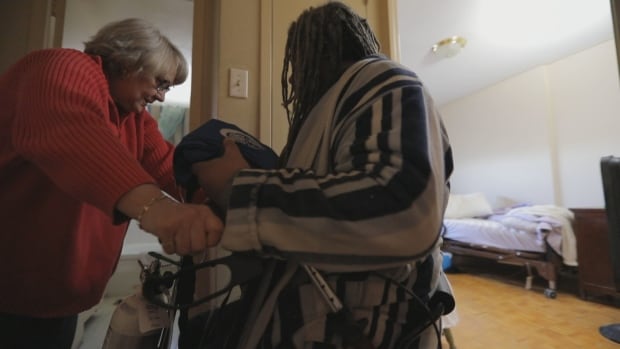 Garrie Garrell is dying, squeezing breath from the last working remnants of lungs destroyed by a chronic disease he says was inflamed by federal prison health care that put him on life-support seven times in his two years behind bars.

Garrell, 59, spends his days on a loaned hospital bed in his apartment in Toronto’s east end, incapacitated by chronic obstructive pulmonary disease (COPD). He is shackled to tubes feeding him oxygen and morphine. His partner, Nancy McWhirter, cares for him, sometimes massaging his neck to help him find breath.

He says his doctor has given him only weeks to live.

“It’s like someone taking you into the middle of the ocean, tying a brick to your leg and tossing you over. And as you’re going down, down the water, you’re fighting to take off that brick,” Garrell said in a video call with CBC News from his bed.

Garrell is suing the federal government for $12 million. He alleges the care he received from medical staff, primarily at Beaver Creek Institution, a federal prison in Gravenhurst, Ont., is the reason he’s dying.

It is one of several lawsuits filed against the federal government, including a Charter of Rights and Freedoms challenge involving prisoner advocacy group the John Howard Society, alleging federal penitentiaries across the country deliver substandard health care that increases the pain and suffering of prisoners.

‘I think of that place every day’

Garrell said the anger he feels whenever he thinks about his time in prison constricts his chest and strangles his breath.

“I try to stay as calm as possible,” he said. “I think of that place every day.”

He was released by the National Parole Board in March 2020, only two years into his nine-year sentence for being a driver in an armed robbery. The board concluded his “physical or mental health is likely to suffer serious damage” if he remained incarcerated.

It also alleges he was denied puffers and medication for his heart and lung disease. Medical staff allegedly refused to provide him with a prescribed nebulizer — a device that turns medicine into mist for the lungs — for about two weeks. When he finally received it, the device was damaged, the statement of claim says.

These actions caused him to be put repeatedly on life-support, according to the statement of claim, which was initially filed in November 2019 and amended in May 2020.

The claim singles out Johanna Kudoba, the head nurse at Beaver Creek Institution, and Myles Sutherland, a nurse at the prison.

It alleges Kudoba “pressured” Garrell into signing a do-not-resuscitate order.

“Which he did out of despair, but later rescinded,” the claim says.

The federal government’s statement of defence specifically denies this allegation, calling it “scandalous” and “devoid of any merit.”

Four other prisoners at Beaver Creek have also filed lawsuits against Kudoba and Sutherland.

None of the allegations have been tested in court.

The federal government denies all Garrell’s allegations in its statement of defence.

“The defendants specifically deny that any [Correctional Service Canada] staff member has refused, neglected or otherwise withheld … reasonable access to medical care and prescribed medication,” the statement of defence says.

“The defendants deny that [Garrell] has been … subject to cruel, inhuman or degrading treatment or punishment.”

A spokesperson for CSC issued an emailed statement saying the agency couldn’t comment on ongoing litigation.

“Correctional Service Canada’s policy related to health services ensures that procedures are implemented to monitor and evaluate the quality and timeliness of health services,” the statement says.

The office of Public Safety Minister Bill Blair, who is responsible for CSC, released an emailed statement saying it couldn’t comment on ongoing litigation.

“There is always more that can be done to improve the quality of care provided and we remain committed to this work,” says the statement from Blair’s spokesperson, Mary-Liz Power.

Before he entered prison, Garrell walked with a cane, as a result of a hip replacement, and managed his lung disease with medication. He rode a motorbike and often travelled to a friend’s cottage near Ottawa where he fished and camped.

Garrell is of Caribbean and Indigenous descent. His father is part Blackfoot and Mi’kmaq and was fostered out as a child as part of the Sixties Scoop that saw Indigenous children placed into non-Indigenous homes across Canada and around the world.

Garrell says he identifies more with his Caribbean side.

He says he grew up in a stable home, but his life took a turn. His criminal record lists 68 convictions ranging from drugs to weapons offences to fraud.

His last offence came after a 10-year pause in his criminal history. He maintains his innocence despite a conviction for his role as a driver in a 2015 armed robbery of a home in Toronto’s east end that left a man beaten and shot twice.

His statement of claim outlines a chronology of alleged mistreatment by prison medical staff beginning at the Joyceville prison near Kingston, Ont. There, Garrell says, he was denied medication for his chronic lung disease, and was eventually put on life-support for the first time in August 2018.

Garrell’s lawyer, Jeffrey Hartman, is representing four other prisoners from Beaver Creek in lawsuits that also name Kudoba and Sutherland as defendants.

The federal government has filed statements of defence in all these cases, denying the allegations.

One prisoner, Robert Balber, suffered an undisplaced fracture in his lower leg after he fell on ice walking to get wood for a sweat lodge fire at the institution. The statement of claim alleges that, after he was denied care for a full day, a doctor recommended a cast, but Sutherland would only give him a tensor bandage. Balber, suffering from continued pain in his leg, fell and hit his head on the washroom floor the next morning and was ultimately hospitalized for surgery, the document alleges.

Gregory McMaster underwent arterial surgery in hospital and was told he needed two heart stents. The statement of claim alleges he wasn’t provided any proper followup by prison medical staff and one of his legs turned black. He was then hospitalized for a leaking artery and his stent procedure was delayed. He eventually suffered congenital heart failure, which led to triple-bypass surgery, the statement of claim alleges.

Sean Spence was hit by a soccer ball in his eye that had just undergone cataract surgery that involved the insertion of a lens. The impact swelled his eye shut and he was consistently denied specialist care for three months, his statement of claim says. He underwent surgery to remove the lens that had been knocked loose by the impact and had his retina reattached, but the statement of claim alleges he suffered vision loss.

Another prisoner, Nic Genci, waited six months to see a specialist to rewire his jaw shut after it was broken by a punch thrown by another inmate, his statement of claim alleges.

None of the allegations have been proven in court.

Cases like these are found throughout the federal prison system, says Catherine Latimer, executive director of the John Howard Society.

Her organization is involved in a charter challenge filed before the Supreme Court of Nova Scotia over the exclusion of federal inmates from the Canada Health Act.

Latimer says the exclusion means federal inmates receive health care at standards far below what other Canadians can access. It also prevents regulatory bodies for physicians from having oversight of the type of care federal prisoners receive, because they only have authority over their respective jurisdictions, she said.

Prisons have medical facilities managed by nurses, but serious cases are usually transferred to nearby hospitals.

Only the federal government, through CSC, is responsible for the health care prisoners receive and they are the final arbiter on the adequacy of that care, she said.

“It’s hard to watch the amount of discomfort and pain and anguish they’re going through, not getting your ailments treated,” Latimer said.

“It’s fundamentally a cultural problem within correctional services in Canada. They see prisoners as the other. They don’t see them as fellow human beings.”

Sen. Kim Pate of Ontario, who once headed the Elizabeth Fry Society, which advocates for women prisoners, says amending the Canada Health Act — which would place prisoner health care under provincial jurisdiction — is only part of a solution that requires a complete rethink.

“If [amending the Canada Health Act] is the only thing that happens, and we don’t also require separately administered systems not inside the prisons, then I think it becomes … a paper decision,” she said.

For Garrell, any changes will come too late for him. He knows he won’t see his lawsuit to its conclusion, but he says he’s fighting on so no one else suffers his fate.

He wants to be cremated and have his ashes buried beneath a bench at his friend’s cottage by the water, where he often sat in contemplation.

Garrell, who has six children, says the deepest wound is not seeing his grandchildren and great-grandchildren grow up.

“I want to cry because I can’t hold them, I can’t touch them,” said Garrell.