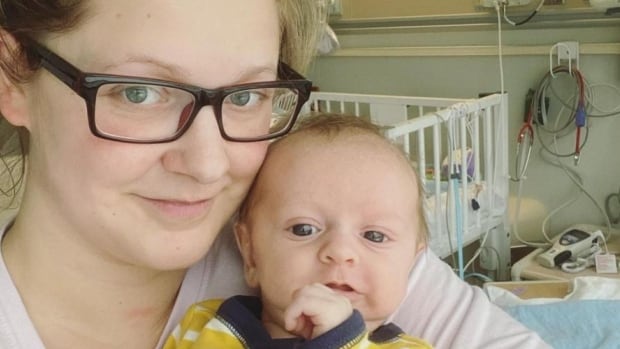 Six-week-old Daniel Datema was in his car seat while his mother was behind the wheel, running a few last minute errands on Christmas Eve.

Laura Datema, a doula in London, sensed something wrong.

“Something just didn’t sound right in the back. It was kind of my mother’s sixth sense,” she said.

Datema is a mother of four: three-year-old twins, a 17-month-old boy, and little Daniel, who last month was battling nasal congestion.

Datema pulled over and found her son turning blue, limp and struggling to breathe. “That was just an automatic 911 call in my brain,” said Datema, who worked as a firefighter for seven years in Ottawa before moving to London, Ont.

While Datema waited for the ambulance, her son began to recovered and respond to his mother.

The pair headed to Victoria Hospital where Daniel was admitted. “Not exactly something a mom wants to hear when she has three other little kids at home,” Datema said.

Daneil Datema is doing well now, but the incident has his mother reflecting on the gratitude she feels for the first responders and healthcare staff who were there for them that night.

“Knowing they’re there, no matter when, doesn’t matter if it’s Tuesday in the middle of July or if it’s Christmas Eve, just knowing that they’re there and able to come and help at any time, it gave me a sense that we had help when we needed it,” she said.

And their time at Victoria Hospital? “It was an unfortunate situation, but it was a wonderful experience,” Datema said.

Yes, there’s a global pandemic, but Datema said nothing really changed, including the nurses. “They were as kind and caring as they always have been.”

Datema wasn’t able to leave her son’s room after he had his COVID-19 test. That meant all of Christmas Eve and Christmas morning in the same hospital room.

“But the nurses would go downstairs to get food and and my bag that was dropped off for me and that’s not really in their job description.”

“They were so willing to do that. And that really made me feel better in a difficult situation,” said Datema.