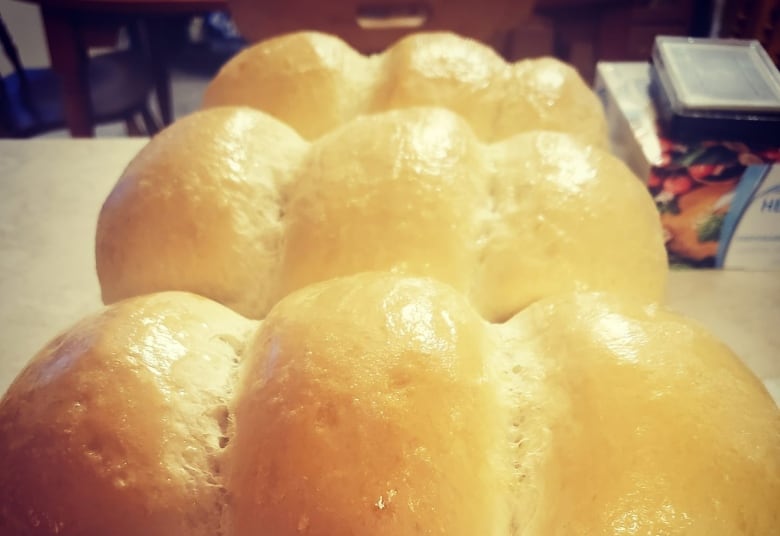 Last week on CBC Radio’s CrossTalk, host Ramona Dearing invited Bonita Hussey to join her to talk bread. The audience then, um, rose to the occasion. Scroll further down for some tempting photos of what our listeners have been up to.

Hussey is well-known in this province for her popular website, Bonita’s Kitchen, which features a series of instructional videos focusing on many traditional recipes — including bread.

“My favourite is the traditional one … it’s the one that we all grew up to love,” Hussey said.

Baking has soared in popularity through the COVID-19 pandemic — so much so, it now has its own hashtag: #quarantinebread. But it’s not just the standard three-bun white that’s been the main focus. People are trying multigrain, gluten-free, sourdough, no-rise breads … the list goes on.

Baking has become so popular, flour giant Robin Hood has been running out of its iconic yellow bags of flour. Yeast has also been at a premium.

“Everybody is getting so creative right now,” said Hussey. “It’s amazing, and people are taking it serious. Just having that warmth of fresh bread coming out of the oven.”

The best way is to wrap it nice and snug in that blanket.– Bonita Hussey

While on CrossTalk, Hussey lent a few of her secrets on how to bake a good loaf of bread, including how to help it rise.

Hussey says it’s important to keep the dough warm. “If the bread gets a little chill at all, it will interfere with the productivity of it.”

She added that even the heat from an oven hood light gives a bit of heat. When asked how she keeps her dough warm, Hussey said “for me, it’s a big towel.”

She added, “The best way is to wrap it nice and snug in that blanket.”

While the show was on-air, listeners were posting photos of their baked offerings on the CBC Newfoundland and Labrador Facebook page. Bread photos of all varieties: plain white, multigrain, Iranian — even small loaves that were affectionately named “corona buns.”

Take a look at our audience photos, and have a listen to the audio from the April 16 CrossTalk show, below.

But the discussion on all-things bread didn’t end last week.

On the April 23 CrossTalk show, Ramona Dearing and artisan breadmaker Jamie O’Flaherty discussed making breads such as sourdough, which has numerous dedicated websites and resource blogs due to its current popularity.

One of the show callers was even kind enough to send us photos of a treasured recipe, below.