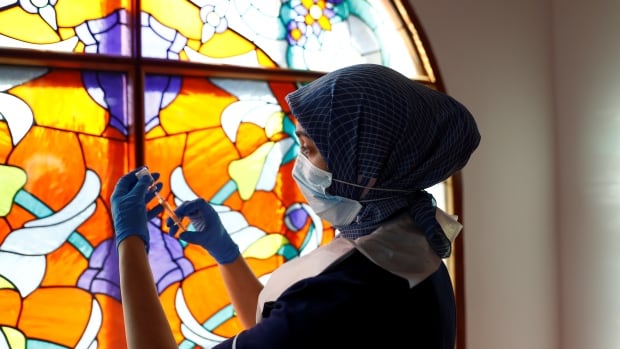 Some Conservative MPs are asking the federal government to suspend the mandatory hotel quarantine policy in the wake of two reports of sexual violence.

Montreal police have arrested a Windsor, Ont., man alleged to have assaulted a woman at a quarantine hotel in Laval, Que. The woman in question told La Presse that a fellow traveller forced his way into her hotel room, grabbed her and then started to undress while grabbing his genitals. She said security guards were slow to respond to her calls for help.

Meanwhile, a Hamilton man hired and trained by Canada’s federal public health agency to work as a security guard has been accused of sexually assaulting a woman during a quarantine check this month. Halton Region Police say the man went to an Oakville, Ont., home on Feb. 18 to carry out a quarantine compliance check, demanded money for a bogus fine and then sexually assaulted a woman after she refused to pay.

“We are deeply angered to hear reports of sexual violence are happening during federally mandated quarantines by those supposed to be protecting public health,” said the statement by a group of Conservative MPs that includes health critic Michelle Rempel Garner and Shannon Stubbs, the Conservative public safety critic.

The MPs said travellers have a right to expect safe conditions at federally run quarantine sites and the alleged sexual violations are “unconscionable.”

“The Liberal government must take action now. We call for the Liberals to suspend the hotel quarantine requirement until they have put measures in place to ensure the safety of Canadians and institute a system for verifying at-home quarantine that doesn’t involve security agents who have not been properly vetted,” the MPs said.

All air travellers returning from non-essential international trips must stay in an approved hotel, at their own expense, for up to 72 hours while they await the results of a COVID-19 test taken upon arrival. The program took effect on Feb. 22.

A spokesperson for Health Minister Patty Hajdu said the allegations are “deeply concerning” and are “being fully investigated.”

“The Public Health Agency of Canada is reviewing its processes internally and with service providers to ensure the health and safety of all returning travellers to Canada,” the spokesperson said in an email to CBC News.

A First Nations community in northern Ontario set up tents to help isolate and quarantine cases of COVID-19. But a housing shortage has some people turning them into permanent homes, even without power or running water. 1:59

Variants will likely make up 40% of Ontario’s COVID-19 cases by mid-March, modelling predicts

Ontario’s public health measures have decreased COVID-19 transmission and have slowed the spread of variants of concern, according to new modelling released by the province’s advisory group on Thursday.

But that good news comes with a caveat. According to the science table, variants of concern like B117 are continuing to spread and cases, hospitalizations and ICU admissions will likely increase soon.

Variants of concern continue to spread quickly in Ontario, the data suggests, and are projected to make up 40 per cent of the province’s cases by the second week of March.

Still, the province’s latest projections come with a less dire tone than in recent weeks, with a smattering of positive news among warnings to remain vigilant.

For one, the data suggests that lockdowns and focused vaccination in long-term care homes have rapidly reduced infections and deaths in those facilities. Doctors also predict the pandemic will likely recede again in the summer.

The science table says the next few weeks will be “critical” for understanding the impact of these variants, and that there “is a period of remaining risk” before the pandemic likely hits a lull in the summer months.

“The next few months are really key to maintaining our gains and to achieving a declining pandemic in the summer,” Brown said. “A better summer is in sight if we work for it now.”

Read more on the situation in Ontario

Quebec wants seniors who live at home to get inoculated at mass vaccination centres set up across the province, but for some people like Judith Cowling, the problem is simple: “I’m not allowed to go out.”

The 81-year-old is in palliative care at home in Westmount, a suburb west of downtown Montreal, after having exhausted treatment options that helped her battle multiple myeloma, a type of blood cancer. Because of her fragile health, she’s barely been able to leave her home since the beginning of the pandemic.

Ontario and British Columbia have recently announced programs to vaccinate vulnerable people in their homes, but Premier François Legault hasn’t said whether Quebec would follow suit.

It’s an oversight Cowling believes the government should rectify immediately. “What’s left of my life, I’d like to enjoy it,” she said.

On Thursday, Quebec opened appointments to get vaccinated at mass vaccination centres for those born in 1936 or earlier. Some 72,000 people signed up in four hours.

But one advocate says there is a “groundswell of opposition” from organizations serving seniors that are calling on the government to broaden the ways in which it inoculates the population.

“We find [the government’s] general attitude toward seniors to be unsupportive,” said David Cassidy, the past president of Seniors Action Quebec and current secretary treasurer of Gay and Grey Montreal.

Several of the mass vaccination centres are difficult to reach by public transit, Cassidy said.

“A lot of us are afraid to go outside because we don’t want to slip and fall and break our hip,” he said. “Simple mobility issues that people take for granted, for seniors it could be a life and death situation.”

Read more on the criticism of Quebec’s vaccination plan

Peel Region police said that while most cases were resolved after conversations with officers, some people refused to follow the rules and were fined $880 under Ontario regulations.

There have been 49 fines handed out since the start of February, a police spokesperson told CBC News. Those fines relate to things like skipping COVID-19 tests or other infractions. The Canadian Press had previously reported, erroneously, that those tickets were for violations of new hotel quarantine rules.

Police said they will not detain anyone for breaking the hotel quarantine rule, which came into effect this week, unless there are aggravating circumstances involved, such as a criminal offence. They said the Public Health Agency of Canada would be responsible for issuing any potential fines under the Quarantine Act.

The federal government this week implemented new rules that require anyone arriving in Canada to fly through Toronto, Calgary, Vancouver or Montreal and stay in isolation at one of several quarantine hotels for up to three nights. Travellers may only leave after a negative COVID-19 test but are expected to self-isolate for a total of 14 days.

The Public Health Agency of Canada said Wednesday that it was “aware of the situation” and looking into allegations of people skipping hotel quarantine.

“Travellers are legally obligated to follow the instructions of a screening officer or quarantine officer through the 14-day period, whether in regards to testing, transit to locations, their mandatory hotel stopover or during quarantine at home or other suitable location,” it said.

“If they do not follow the instructions, there are penalties, including a maximum fine of up to $750,000 or imprisonment for six months.”

Drug manufacturer Moderna says it will begin testing a variant-specific version of its COVID-19 vaccine that would target the B1351 variant first detected in South Africa.

The company has previously reported that its original two-dose vaccine — already approved for use in Canada — appears to provide protection against the B117 variant first detected in the U.K., as well as the B1351 variant, though its own research suggests it may be less effective against the latter.

The company says it will study the B1351 variant-specific vaccine both as a potential booster to the original COVID-19 vaccine and as a standalone for people who have not yet received a vaccine at all.

It will study the outcomes of three different scenarios:

The B1351-specific vaccine will undergo clinical trials at the National Institutes for Health in the U.S.

Moderna reported last month that its vaccine was essentially as effective against the B117 variant as it was to prior variants. But it found there was a reduction in its neutralizing ability against the B1351 variant. Neutralizing antibodies are one of the body’s immune responses to control viral infections.

The B1351 variant has been detected in at least 40 countries, while the B117 variant has now been identified in 80. Both have been found in Canada.

Health Canada would need to approve any booster or new vaccine against the B1351 variant before it could be administered here.

A pandemic-driven shortage of semiconductors — the microchips needed in everything from military equipment to coffee makers — is causing delays around the world, disrupting supply chains for smartphones and causing major problems in the auto industry. For consumers, it means a delay in getting some products and could also mean higher prices.

Video-game lovers are among those affected. Toronto’s Max Nekrasov, 15, runs a Twitter account with more than 19,000 followers that flags whenever a retailer restocks the Playstation 5, as the popular gaming console has proven elusive during the COVID-19 pandemic.

“It can take really a few months before you can get one” because there’s not much stock at all, Nekrasov said.

The paucity of Playstations is partially due to an increased demand for home electronics as people have been hunkering down amid lockdowns and stay-at-home orders. But another factor is that Sony can’t source enough semiconductors to keep up.

“The supply chain is broken, from the beginning all the way to assembling the goods and delivering it to the customer,” said Nikola Dimitrov, a vice-president with AIS Technologies Group in Windsor, Ont.

Dimitrov’s company needs semiconductor chips for precision imaging machines that assemble key auto parts and verify the work has been done correctly. Dimitrov said there’s been a lag of several months during the pandemic, affecting both work timetables and billing cycles.

The pandemic changed global demand patterns — people bought more electronics but fewer cars and trucks, so automakers scaled back production, said Will Mitchell, a professor of strategic management at the Rotman School of Management in Toronto.

“They don’t order as many chips, [so] the people who make the chips cut back on staffing, shut down some facilities and have less of a base to make more chips,” he said. “Now we’re in 2021, demand is coming back, orders for chips are coming back and the companies that make the chips have to scale up production.”

But those companies — in Korea, Taiwan and Singapore, among other places — need two to three months to ramp up again, he said.

That’s bad news for automakers. Chrysler shut down its Windsor plant for three weeks due to the shortage, forcing temporary layoffs. And General Motors idled three plants, including one in Ingersoll, Ont.

Read more on how the pandemic has affected supply lines

Find out more about COVID-19

For full coverage of how your province or territory is responding to COVID-19, visit your local CBC News site.

To get this newsletter daily as an email, subscribe here.

See the answers to COVID-19 questions asked by CBC viewers and readers.

Still looking for more information on the pandemic? Reach out to us at [email protected] if you have any questions.