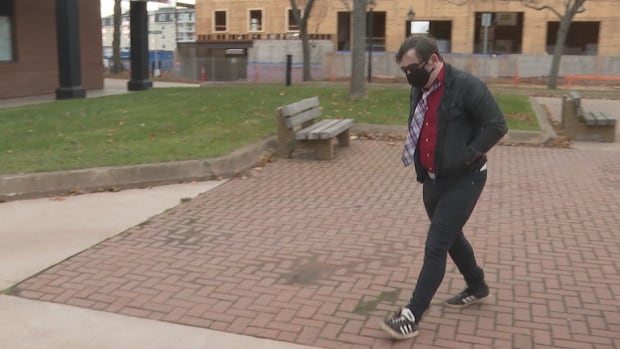 A teenaged girl and her family were at the Supreme Court in P.E.I. Monday to describe the lasting harm caused by sexual abuse the girl experienced.

Aaron Philip Crane, 36, pleaded guilty in September to sexual interference against the girl. She was under 16 at the time of the abuse.

Charges of sexual assault and sexual exploitation were stayed by the Crown.

Monday’s hearing was an opportunity for the judge to hear the victim impact statements and for lawyers to recommend an appropriate sentence for Crane.

Crane had been an actor, musician and private music teacher in Charlottetown. The identity of the girl is protected by a court publication ban.

The girl told court she met Crane when she was a pre-teen taking private music lessons from him. He began sexually abusing her a few years later.

Court heard he would often meet her during breaks at school to take her to his apartment. The sexual contact lasted over several months.

It wasn’t romantic. It was abuse.– Teenaged girl at heart of case

“It wasn’t romantic. It was abuse,” she said.

Monday she told the court that right now it seems impossible that she will ever feel normal again.

“This wasn’t my fault. I battle with this daily and most days I don’t win,” she said.

However, she said she is a survivor, not a victim. She vowed to fight to help keep other children safe, and urged others to do the same.

“Listen, learn and educate, especially the younger generation like me,” she said.

The girl’s mother told the court she is still under a doctor’s care, and still experiencing panic attacks, rage, guilt, sadness, anger and flashbacks.

“I was lied to and deceived repeatedly by a man I trusted with my daughter,” she said.

“What went through his mind to justify his sick behaviour? … I am consumed with rage.”

The girl’s father told the court, “I see daily the trouble Mr. Crane has caused in my home. I am afraid to leave the house because of what might happen while I’m away.”

The girl’s sibling also read a statement, describing their parents as “too sad to talk.”

“My house is always sad and angry. A lot of time I cry myself to sleep.”

Crown attorney Lisa Goulden recommended a prison sentence of seven to nine years. She told the court that’s based on a Supreme Court of Canada decision that found all provinces are sentencing too low for sex crimes against children.

Crane’s lawyer, Conor Mullin, suggested a federal sentence of 27 to 48 months. He said Crane doesn’t have a criminal record, pleaded guilty to the offence, and accepts responsibility for his actions.

I’ve destroyed every relationship and it’s all my fault.– Aaron Crane

Mullin said Crane had contributed to the arts community for years, and played organ at two churches in rural P.E.I. for 20 years.

Crane addressed the court as well, apologizing for his actions.

“I’ve destroyed every relationship and it’s all my fault,” said Crane.

“From my five-year-old fiddle student to the 90-year-old lady I hug in church every Sunday, I have disappointed them.”

“I have heard you here today,” the judge told the girl and her family.

“I see a young woman who has strength and courage beyond her years. I see a supporting … sibling. I see two parents who are strong and intelligent and supportive. You are blessed in your love for each other. You have everything you need to pull together and find your path forward.”

MacPherson said she will also rule Jan. 5 on a request from the girl to lift the publication ban on her identity.

The girl said she wants the ban lifted so she can speak out and tell her story publicly.

MacPherson asked the girl to think hard about that request.

“Once the ban is lifted, the horse is out of the barn. It may give you a sense of control but you will be giving up control too,” she said.