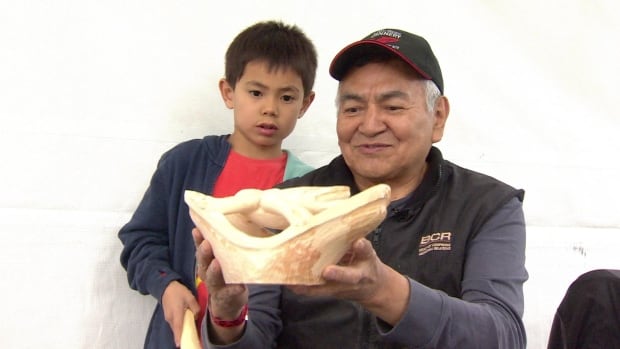 Tahltan-Tlingit master carver Dempsey Bob is one of six artists across Canada to be recognized with a 2021 Governor General’s Awards in Visual and Media Arts Artistic Achievement Award.

“Dempsey Bob is recognized as one of few master carvers of his Nation who is pushing the art forward, successfully blending contemporary with the traditional style of Tahltan-Tlingit sculptural art, while remaining true to its complex protocols and unique design history,” said nominator and visual artist Jim Logan, in a Canada Council for the Arts media release.

Bob’s works are featured in museum collections and galleries around the world, including the Columbia Museum of Ethnology, the Smithsonian Institution, National Museum of Ethnology in Japan, and Canada House in London. In 2013, he was appointed Officer of the Order of Canada — one of the nation’s highest civilian honours.

The GGArts Awards were created in 1999 by then Governor General Adrienne Clarkson and the Canada Council for the Arts.

The winners, who are selected by a peer committee, receive $25,000 and a medallion produced by the Royal Canadian Mint, and their work is celebrated by the National Gallery of Canada.

Bob has lived in Terrace for the past 14 years, where he serves as a senior advisor to the Freda Diesing School of Northwest Coast Arts at Coast Mountain College.

“We are very proud of the work, talent and perspective Dempsey Bob brings to the students,” said college president Justin Kohlman in a media release.

“He has expertly and compassionately guided hundreds of students through the learning and reclaiming of traditional northwest coast art. We offer Dempsey our heartfelt congratulations.”

The Local Journalism Initiative supports the creation of original civic journalism that is relevant to the diverse needs of underserved communities across Canada, broadening availability and consumption of local and regional news on matters of civic governance. Read more about The Local Journalism Initiative here.  Any questions about LJI content should be directed to: [email protected].