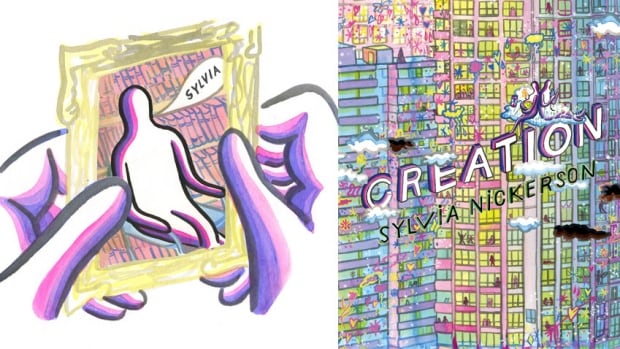 Sylvia Nickerson is among the winners of the 2020 Doug Wright Awards, celebrating Canadian comic creators.

Over 150 books by Canadian authors and artists were up for consideration in four categories: best book, emerging talent, small- or micro-press book and kids’ book.

This year, for the first time, the Doug Wright Award winners will each receive a cash prize of $100, along with their trophy.

The book explores Nickerson’s experience of becoming a mother and navigating a rapidly changing city as an artist. Creation tackles gentrification in Hamilton, Ont., the art community’s role in these changes and how motherhood has disrupted Nickerson’s perspective on life.

Children’s book author and illustrator Elise Gravel’s The Worst Book Ever was awarded the Egghead, the Doug Wright Award for best kids’ book. In The Worst Book Ever, the story’s characters rebel against the author’s bland imagination, tired tropes and stale character choices, in an attempt to steer the narrative in a more interesting direction.

Bezimena, which translates to “nameless” in many Slavic languages and is inspired by the myth of Artemis, is written from the perspective of a sexual predator and delves into the increasingly twisted mind of a young man obsessed with his classmate.

Gleem by Freddy Carrasco received The Pigskin Peters, award for best small- or micro-press book. Gleem, set in an Afro-futuristic world, is a collection of three “aside-fi,” science fiction stories.

The Doug Wright Awards also posthumously inducted Walter Ball, longtime Toronto Star cartoonist, into its Giants of the North Hall of Fame. Ball was best known for creating the strip Rural Route, which was a staple in Canadian newspapers for more than a decade beginning in the 1950s.

The 2020 winners were chosen by a panel of three judges per category.

The virtual ceremony was held on YouTube and Facebook on May 9, 2020 and was hosted by actor, writer and filmmaker Don McKellar.