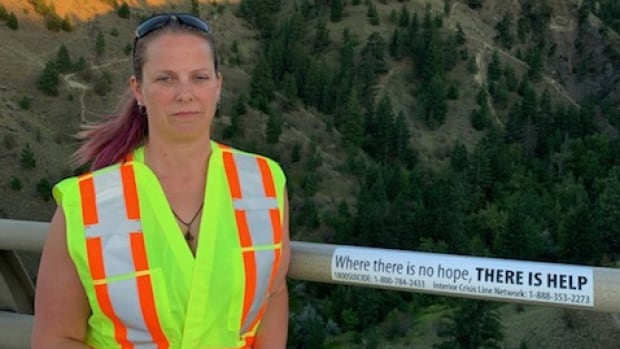 “Where there is no hope, there is help.”

That message, along with phone numbers for 24-hour support, is posted along a prominent bridge in Kamloops, B.C., with the hope of preventing suicide.

Gallagher’s loss prompted her to petition the provincial government to do more to help people. That work got her a meeting with Kamloops North Thompson MLA Peter Milobar, who put her in touch with B.C.’s Transportation Ministry.

After gathering information about responses to the bridge from the RCMP, the ministry agreed to help Gallagher, and they worked together to put up the stickers, which are more weather-resistant than signs Gallagher had been posting at the bridge, offering support for anyone contemplating suicide.

“It’s something to make it so it’s not so easy for someone to just do that in the spur of the moment, in that one moment when there’s no hope,” Gallagher said.

Originally, she wanted a barrier or net put in place, but the ministry wasn’t able to accommodate the request.

“Though more extensive measures aren’t possible at this time, we believe signage enhancements are a positive start,” it told CBC in an emailed statement.

It also noted it will consider additional measures when the Peterson Creek bridge undergoes future upgrades.

The ministry printed 30 stickers to ensure it had backups in case of damage. Printing and installing the stickers cost about $3,000.

While this is the only bridge in the province that has stickers like this, the Ministry of Transportation said there is potential to expand to other bridges in the future if there are other locations with a history of suicide attempts; each case would be looked at on a case-by-case basis and in consultation with community partners, such as local police and crisis workers.

Gallagher said knowing that her work to offer support to others in the moment her son faced could make a difference is “profound.”

“Hopefully, this will help somebody else save their life.”

Where to get help:

If you’re worried someone you know may be at risk of suicide, you should talk to them about it, says the Canadian Association for Suicide Prevention. Here are some warning signs: