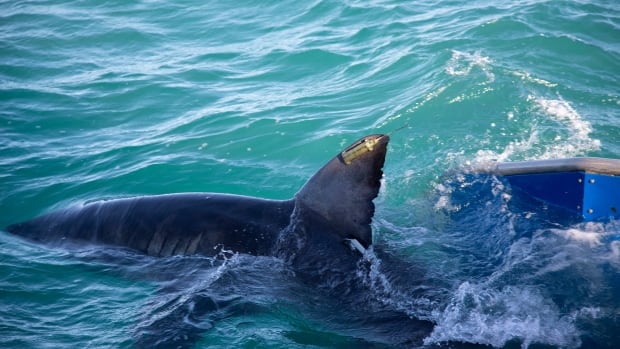 A shark research vessel is tied up in Souris, P.E.I., riding out post-tropical storm Teddy.

The crew from Ocearch has been dodging stormy weather since it started Expedition Nova Scotia.

“We’ve been trying to work on the water since around September 9th and we’ve really only had the weather to try to work about four days,” Chris Fischer, Ocearch founder and expedition leader told Island Morning.

“We’ve just been battling weather and now with Hurricane Teddy, we’re hunkered down here on the eastern end of P.E.I.”

The Florida-based shark researchers received permission from the Canadian government for their Nova Scotia expedition, including rules around testing for COVID-19.

Those rules also applied to their unexpected visit to Souris.

“The town’s been great to us, we’ve been quarantined on the ship ever since we arrived,” Fischer said.

“No one’s allowed on and off but they allowed us to come in to the end of their wharf and tie up out here by ourselves and ride out the storm until it’s safe to go back out and start working.”

Originally, the 28-day expedition was supposed to focus on waters around Nova Scotia, but a series of tropical storms has sent the research vessel looking for cover.

“Trying to find areas to work, but really haven’t been able to find where the conditions are right.”

Fischer said the weather has brought the research vessel to places they weren’t expecting to visit, but where their tagged sharks have been sighted, in the Northumberland Strait and the eastern end of P.E.I.

“We were not even planning on coming into this region on this trip, but the weather pushed us over here,” Fischer said.

“We’ve explored a lot of places that we hadn’t looked at before, that we wanted to look at in future years.”

Fischer said the conditions in the Northumberland Strait have also been challenging for the research crew.

“So when you’re in the straits here, there’s tremendous currents and that current makes it very difficult for our operation to work, even if the sharks are there.”

Fischer said despite being forced to change their plans, the expedition has been a productive one so far.

“We had three really good days, and on the first day, we were able to capture one mature male white shark named Breton, we captured him off Cape Breton,” Fischer said.

“Then the next two days, we had another shark come in on us and pick up a bait and drop it, so the three days we were able to work, we saw a shark each day.”

Fischer said the crew is hoping for more of those sightings, once they ride out Teddy and head back to Nova Scotia for the rest of the expedition.

“We’re just hoping if we continue to grind it out and endure that the ocean will give us the gift of some good weather so we can finish the trip real strong, which wraps up on October 5,” Fischer said.