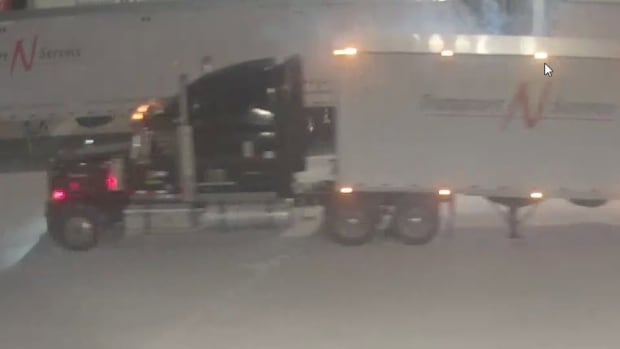 A tractor trailer, loaded with $500,000 worth of webcams, was stolen in Guelph-Eramosa Township on Monday and later found empty in Waterloo, Ontario Provincial Police say.

The theft happened at a business on Whitelaw Road just west of Guelph. Officers were called to the business at 10 a.m. Monday. Photos released by police show the trailer was white with black and red lettering and the name Transport N Service.

Police say a light-coloured sedan, similar to a Ford Focus, was captured on video surveillance driving slowly past the business. A short time later, a dark red or black tractor pulling the stolen trailer, loaded with the webcams, was seen leaving the lot at a high rate of speed.

The empty trailer was recovered on Columbia Street E. in Waterloo at 1:30 p.m. the same day.