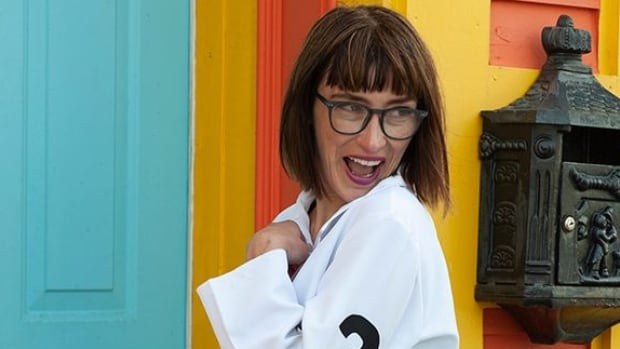 Andie Bulman has done standup and sketch comedy for years, and her dream job is to write for the CBC television show, This Hour Has 22 Minutes. The 34-year-old also loves to cook, and her catering business was paying the bills — until the COVID-19 shutdown came along.

Now she’s trading her apron for a lab coat and switching gears to host a kid’s TV show — one of two in the works.

“I was pretty panicked about this year, earlier in the summer, when I realized that my business and main source of income was going to be on hold for some time,” said Bulman.

“I’ve always had a finger in comedy, in that world, but I was not trained in it and I’m not trained in writing. And so when the pandemic hit I sort of thought, I need to get better at this and I need to figure out how to pitch ideas.”

Bulman, who’s also a regular contributor to CBC N.L., has been taking advantage of workshops offered by the local arts community, and when St. John’s-based producer Ruth Lawrence organized a free class in writing a TV pilot in March, she signed up.

Bulman and three comedian friends, Allison Kelly, Stef Curran and Elizabeth Hicks, will use costumes and physical storytelling to make classic literature and folk tales come alive for young audiences in Tales from the Floordrobe.

“We interview a paleontologist and an ornithologist, but we also create some ‘ologies,’ like ‘deliciousology’ and ‘cheeseology.’ And we go and interview people who work in the different ‘ologies.’ And then we go back to the mad scientist kitchen lab and I do an experiment and then we have some trivia where we where review what we’ve learned,” she explained.

“I just think it’s really cool that she reached out to newer people to see if they had ideas. And it’s just really awesome to have someone lend a hand like that, and to show you where an opportunity is,” Bulman told CBC Radio’s On The Go.

Bulman isn’t the only local talent with shows coming to the small screen.

We Are Here is a documentary investigation show hosted by Santiago Guzmán, an actor from Mexico City living in St. John’s. The show looks at the diversity that exists in the city and how people have been attracted to Newfoundland and Labrador from countries all over the globe.

The Adventures of Gary and Lou is a puppet show from teenager Jake Thompson, already known for the Rogers TV show, NL Now, which he started when he was 11.

And there’s one for adults as well. Beers with The B’ys is a craft beer oriented comedy series with Nick Masters, which features two comedians visiting micro breweries across the province.

“They are so varied and so much fun, and each of them has their own particular challenges to meet, so I’m learning a lot,” said Lawrence, who is directing all five of the shows and acting as mentoring producer on four of them.

In an unusual twist, it was actually the lockdown that opened the door for Bulman and the other artists now working on shows for the small screen.

Bell broadcasts local sports programming, but when COVID-19 shut down all the stadiums, the company had extra funds to invest in documentary, lifestyle and children’s TV programming, Lawrence said.

The chance to make a career detour in the midst of a pandemic was a relief for Bulman, and she’s happy to help create employment opportunities for the local crew as well.

“I’m just really excited that I get to give people some work. Not tons of work, but some,” she said.

The shows are currently in different stages of production and development, and will be completed by August 2021. They will air on Bell’s Community Channel 1 and the Fibe TV app.