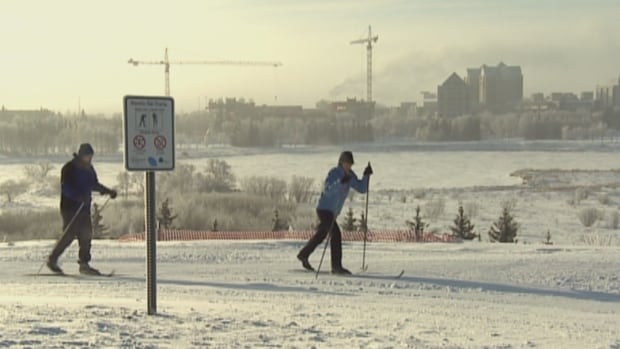 Edmontonians are looking to find ways to stay active during the COVID-19 pandemic winter, and shops are seeing a surge in interest for skiing and winter cycling.

Just as cycling’s popularity spiked in the summer made it difficult to find a new bike in Edmonton, Edmontonians may have similar problems finding new skis this winter, with some shops already seeing waiting lists for equipment.

Jodi McAvoy, manager of The Skier’s Sportshop, said they’re already seeing long wait-lists from people who want to pick up cross-country skiing equipment to get outside during the winter.

“Whether it’s snowshoeing or cross-country skiing or maybe it’s fat-biking, people are just telling me they want to be outside this winter,” McAvoy said on CBC Radio Active on Thursday.

She said they’ve also seen interest in downhill skiing already from families who have taken their kids out of team sports like hockey or soccer this winter.

On top of this, McAvoy said she’s hearing much more often from people getting back into skiing after not having tried it for years. She said this has been exciting after a few down years for the sport, which she chalks up to how expensive skiing can be.

“I’ve heard this like 10 times in the past week ‘haven’t skied in six years but we want to do it again as a family,'” McAvoy said.

“It’s like getting back on the bike, picking the sport up again.”

Cycling was the sport of choice over the summer and it looks like skiing is going to be the outdoor sport of choice for winter. Rod Kurtz talks with local shops that already have waiting lists for equipment. 8:05

Adding to the interest has been snowbirds who aren’t able to travel south for the winter like usual, said Bob Schilf, owner of Track ‘N Trail. The local sporting goods store sells cross-country and backcountry skiing gear and also has a long waitlist of customers looking to buy equipment.

Schilf said his company decided to order more gear for the coming winter back in July when he saw the demand at bike shops. Even then, he heard some of the equipment was already in such high demand that it wouldn’t arrive until November.

He said business has been booming since September.

“We’re doing every day, business-wise, what we would normally do in a December pre-Christmas,” Schilf said.

Business is picking up at ski hills as well. Tim Day, spokesperson for Snow Valley, said they’ve already seen a spike in season pass sales and skiing lesson sign-ups. This all comes as ski hills prepare for a very different winter where they’ll be trying to prevent the hill from getting too crowded.

“We’re really encouraging people to use your car as your change-room. Come inside but don’t stay too long. Even encourage tailgating lunches out of your car,” Day said.

“We’re redoing everything as far as how people pick up rentals and how they pay for stuff, and even how many day lift tickets we have available. You’re going to have to book in advance, you can’t just drive up and go skiing one day if you’re not a season pass holder.”

It’s not just skiing that’s seeing a big seasonal boost. Chris Check, owner and operator of Pedalhead Bicycle Works in Edmonton said he’s seen at least double the interest this season in the number of cyclists coming to them about how to keep biking through the winter, compared to past years.

Check said this is usually for a niche group of competitive cyclists, cycling enthusiasts or people who’ve decided not to own a car. But with fat bikes and studded tires making winter cycling easier, Check said the growth he’s seen for this activity has been exciting this year.

“People are making friends with winter. It can be a long winter here and people are looking for different ways to enjoy the winter that Edmonton has,” Check said.

“COVID got people thinking in a different direction and maybe brought them back to bicycles where they had maybe let it slide and were doing other activities.”

Winter cycling has typically only been thought of as being for hardcore, intense riders, said Kelly Hodgson, a spokesperson for United Sport & Cycle. But interest is rising as people feel confident the activity is a safe one for cold, snowy weather.

“Normally this time of year we would have seen a bit of a decline in interest,” Hodgson said. “But we’ve definitely seen that carry over … the general cyclist wanting to show interest in cycling in the late fall into the winter season.”