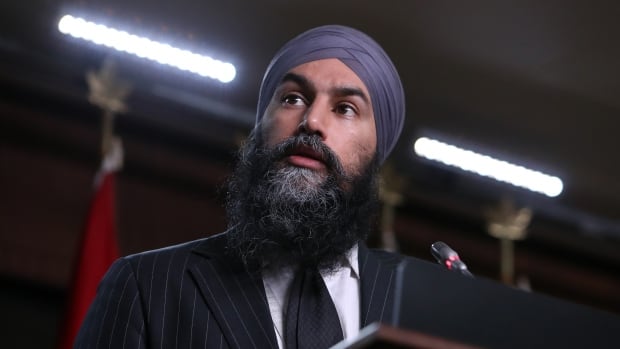 Across Canada, opposition parties have struggled to make a mark as governments continue to steal the spotlight as they grapple with COVID-19. Jagmeet Singh’s New Democrats are not one of those parties.

The polls suggest support for the NDP is on the rise. But what’s behind it — and is it something that might last?

According to the CBC’s Canada Poll Tracker, an aggregation of all publicly available polling data, the Liberals still hold a solid lead in national polls. Erin O’Toole’s Conservatives continue to trail with less support than they had in the 2019 federal election.

But the New Democrats stand at 19 per cent in the Poll Tracker, well above the party’s 15.9 per cent share of the popular vote from 2019.

It didn’t happen overnight; the NDP is not in the midst of a surge. Instead, the New Democrats have been picking up a point or two per month since the beginning of May 2020, when the NDP bottomed out at 14.2 per cent in the Poll Tracker.

The NDP’s position in the polling average oscillates up and down based on which pollsters have published the most recent numbers. Certain polling methodologies appear to give better results for the NDP than others. Online surveys, for example, tend to produce higher numbers for the NDP than those conducted via interactive voice response (IVR) over the telephone.

But regardless of their methodologies, multiple pollsters are picking up this rising orange tide.

Léger has pegged the NDP at between 20 and 23 per cent support in each of its last seven polls going back to the end of November. The online polling firm had the NDP at just 14 to 17 per cent in April and May.

Mainstreet Research, which does its polling via IVR, has had the NDP at 15 per cent after a few earlier surveys put the party in the 12 to 14 per cent range.

The Angus Reid Institute and Ipsos have put the NDP around 20 per cent in national polls; last year they were recording NDP support in the 17 to 18 per cent range.

While the increase only amounts to a few points — and not every pollster is seeing the same thing — the trend line broadly appears to be a positive one for Singh.

NDP up in every part of the country

The polls suggest the New Democrats have improved their position in every region of the country, with gains of between three and five points since their low last spring.

The NDP now sits at about 28 per cent support in B.C., an increase of five points since May 2020. The party is also up five points to just under 20 per cent in Ontario. The NDP is up by about four points in Alberta (to 18 per cent) and three points in Quebec and Atlantic Canada (to 12 and 16 per cent, respectively).

The fact that the rise in NDP support has been nearly uniform from coast to coast suggests that Singh and the federal party can take some credit for the better numbers. It also suggests a spillover effect from provincial politics.

Take British Columbia. It’s unlikely a coincidence that support for the federal New Democrats spiked in mid-October, when B.C. was in the midst of a provincial election. The B.C. New Democrats under Premier John Horgan secured a solid majority government that month. The federal NDP saw its poll numbers go from the 21 to 24 per cent range prior to October to the 25 to 29 per cent range afterward.

And as the popularity of Premier Jason Kenney’s government slipped in Alberta, support for the federal NDP has risen. Some provincial-level polling puts Rachel Notley’s Alberta NDP ahead of Kenney’s United Conservative Party. As in 2015 — when Tom Mulcair’s federal NDP got a bounce from Notley’s upset victory — it’s hard to see the two polling spikes as unrelated.

Political shifts in provincial capitals can’t entirely explain the rise of the federal New Democrats, however. The NDP does not have a significant presence in Quebec or much of Atlantic Canada. In Ontario, Andrea Horwath’s NDP has been unable to make any major headway in the polls against Doug Ford’s Progressive Conservative government.

There has been a little movement regionally, however, and the NDP has been able to take support away in several places.

The Liberals have lost the most since their peak last spring, with the NDP being the primary beneficiary in Ontario, Atlantic Canada and the Prairies. The federal Conservatives have fallen back while the NDP has picked up support in Alberta. In B.C., the NDP is up while the Liberals, Conservatives and Greens are down. In Quebec, it’s the Bloc and Liberals who have slid while the New Democrats (and Conservatives) have climbed.

With a minority government in Ottawa, Singh has enjoyed some success in using his party’s leverage in the House of Commons to get the Liberals to move on things the NDP supports. Recently, he’s started presenting election-style campaign promises.

But Singh might also be able to thank O’Toole and Prime Minister Justin Trudeau for making him look good by comparison.

Trudeau’s approval ratings have slipped in recent weeks but the Conservatives have not seen any corresponding bump. At 29.9 per cent, the party is below 30 per cent in the Poll Tracker for the first time since O’Toole became leader at the end of August.

Like Trudeau, O’Toole has watched his personal polling numbers worsening. Canadians have a more positive impression of Singh — but that has been the case for some time. The most recent survey by the Angus Reid Institute finds 49 per cent holding a favourable view of Singh, compared to 39 per cent who hold an unfavourable view. That’s almost exactly where the Angus Reid Institute situated Singh in May 2020.

This all suggests that the NDP’s steady rise might have a lot to do with how the other parties are doing — which raises the question of just how durable it might be.

Little to gain, lots to lose for NDP

Singh pledged last week that, because of the pandemic, he would not force an election by defeating the Liberal government in the House of Commons (though a spokesperson later told CBC News this pledge did not extend to a budget vote, which would force an election if the Liberals lost it).

The experience of Newfoundland and Labrador — which might only learn the outcome of its election two months after it was originally supposed to — has provided a stark example of what can happen when an election is held in the midst of a pandemic. And there might be little for the NDP to gain from forcing an election in the near term.

According to the Poll Tracker, at their current level of support the New Democrats might emerge from a spring election with about 29 seats, only five more than they hold now.

But if an election were held with the parties polling as they do now, the Conservatives might actually lose seats — and perhaps hand the Liberals a narrow majority government in the process.

For a few seats more, Singh could risk losing the leverage his party holds with a minority government.

It’s also possible that the polls are little more than a mirage. The NDP under-performed its polling in the last federal election, winning about a dozen fewer seats than expected.

If Singh is being buoyed by the popularity of some of his provincial cousins and the uninspiring performance of his federal opponents, he might be better advised to avoid putting his party’s support to the test too soon.