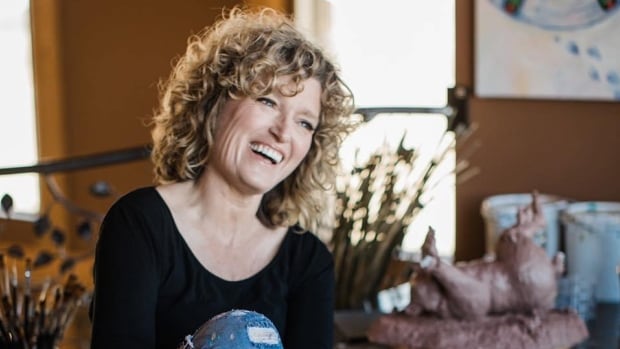 A Saskatoon artist is joining the elite ranks of those who bring the magic of Disney to life.

Denyse Klette is the first Canadian to be signed by Collectors Editions as an officially published creator of Disney fine art.

“It’s magical,” Klette said. “My mom and dad had Sunday nights as a special evening where … they’d make us hamburgers and French fries and we’d watch The Wonderful World of Disney. So I absolutely grew up on this.”

The Collectors Editions is not a Disney Corporation, but it’s the only independent company in the world with rights to produce and publish Disney fine art.

“They have a small group of artists from around the world that they’ve selected and we get to design and create Disney art,” Klette said. “The originals are sold in different Disney galleries and also they have reproductions done.”

The painter and sculptor lives on an acreage just outside of Saskatoon and has a style that combines her mediums. Klette paints an image, then sculpts around the edges to give it a 3D aspect.

Klette said she is allowed to base pieces on almost any of Disney’s animated works. She first produces a full-colour concept drawing on her iPad then uploads it to the Collectors Edition team. The team sends it to the Walt Disney Company, which then reviews it and makes any corrections on proportions or colours. Disney then sends it back to the Collectors Edition, which gives her the go ahead.

So far she has created artwork inspired by Beauty and the Beast, Moana, Tangled, Mickey and Minnie Mouse, Frozen, The Lion King, Lilo & Stitch and Mulan.

Her work is mainly on display at the Disney art gallery at the Epcot Centre in Florida, but she’s allowed to sell in Canada through her website. Her originals or reproductions can also be found at galleries authorized by Collector’s Editions.

“It’s so much fun. I get to walk into my studio and paint Mickey Mouse,” Klette said. “I still do like my non-Disney, but to do Disney art, it’s such a magical and close-to-the-heart experience.”

Klette said she has an extensive library of Disney books that she collected over the course of almost 40 years.

“It really is a dream come true.”

Noka Aldoroty, the director of Disney fine art at Collectors Editions, said in a statement that Walt Disney’s ability to inspire others to create was his greatest talent.

“It amazes me that even to this day his legacy is still inspiring artists to invent new ways of reimagining and interpreting Disney stories through their own creative lens,” Aldoroty said.

“We saw in Denyse a truly unique point-of-view artistically, and we could not be more excited to share her talents with Disney fans and art collectors around the world.”

Klette is currently working on pieces inspired by Cruella de Vil from 101 Dalmations and Ursula from The Little Mermaid.

From The Lion King to Moana, Disney animation has inspired decades of memorable characters. Now, a Saskatoon artist is joining the elite ranks of those who bring the magic of Disney to life. Denyse Klette is the first Canadian to be signed by Collectors Editions, as an officially published artist of Disney Fine Art. Denyse joins host Stefani Langenegger to talk about her unique artistic style and being signed to Disney. 5:15