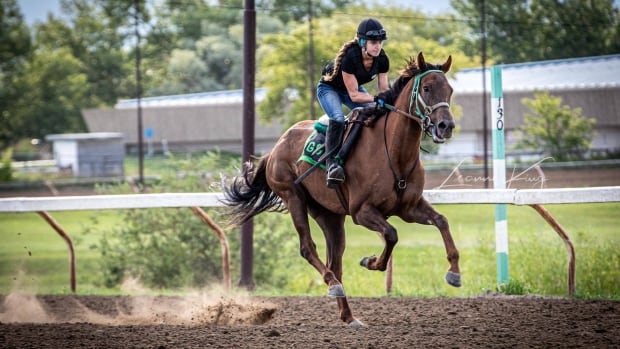 Horse-racing at Marquis Downs, a racetrack operated by Prairieland Park, was cancelled last year due to COVID-19. Earlier this week, the organization announced the 2021 season would be cancelled as well.

The news is a heavy blow for many in the industry. Some claim Prairieland Park has been keeping them in the dark about plans for the season after a deal to lease the facility to Pan Am Horse Racing Inc. for 2021 was unsuccessful.

“It seems to me that they haven’t put forward the effort that one would expect from an organization that is in the business of running horse-racing and promoting agriculture,” said Nicole Hein, an apprentice jockey and one of the only female jockeys in the province.

Hein is spearheading a grassroots effort to raise awareness of the short- and long-term effects the cancellation will have on the horse-racing industry in Saskatchewan.

She said many in the community are upset, as there’s been “silence for months” from Prairieland Park, leaving many who depend on the racetrack in limbo.

Hein was one of the organizers of a small demonstration at City Hall on Friday aimed at making more people aware of the situation. She said organizers feel their voice has not been heard and that Prairieland Park needs to do more to support the sport.

“They just sat silent for months and then made this decision,” she said.

Mark Reiger, CEO of Prairieland Park, said the organization was still making efforts to run races in 2021 until three days before the cancellation.

He said the pandemic hit Prairieland Park hard and presented issues for a potential 2021 season. He pointed to both recruitment of international jockeys — a process with extensive COVID-19 protocols — and a lack of agreement with the Saskatchewan’s Horsemen Benevolent and Protective Association (HPBA) representing owners and trainers as factors.

“The fact is, the horsemen haven’t agreed to 20 days of racing, which is a problem in itself. If they refuse to race, then we have no horses, so we’re done,” he said. “The bigger issue is the jockey situation. If we had an agreement with the horsemen and we could get jockeys in, we might consider this.”

Prairieland Park put forward an offer to run 20 days of races, but the HPBA wanted to see a 24-day season to ensure the costs of running are covered.

Regier said the issue comes down to finances.

“We invest large amounts of money to make it operate and there’s limits as to what we can do,” he said.

“With the shutdown of our whole operations here, Prairieland could be losing as much as $3 million this year. So that poses a big challenge for us too. How many days are enough? What are we supposed to do? We try our best here to make it work, but there are limitations as to what we can do.”

He said Prairieland not having applied for permits as usual a “non-issue,” saying they could have been acquired quickly if needed.

We try our best here to make it work, but there are limitations as to what we can do.– Mark Reiger, CEO of Prairieland PArk

Sport will suffer from cancelled seasons

Eddie Esquirol, President of the Saskatchewan HPBA, said owners and trainers countered with the 24-day season because cash streams from gate admission and concessions would likely be off the table due to COVID, so they would be relying on revenue from wagering and race takes alone.

He said some racetracks have had success broadcasting their globally via simulcast, which allows people in international markets to bet on live races even if physical attendance is limited.

While you can wager on horse racing at Marquis Down through a smartphone app, the software is based out of Ontario, meaning some money made from Saskatchewan betters won’t stay in the province, Esquirol said.

He said Prairieland Park needs to invest in a global simulcast, and the marketing and planning required to make it successful.

He also said he’s “at a loss” as to why Prairieland Park leadership won’t join the HPBA’s efforts to lobby the provincial government for funding, which he said could be one avenue to saving the struggling industry. He’s not sure Saskatchewan’s horse-racing industry will be able to survive without provincial intervention.

Praireland has no interest in further lobbying efforts

“That’s their initiative, it’s in front of the table and we’ll let them talk to the government,” he said, noting there wouldn’t be thoroughbred racing in the province at all if not for Marquis Downs.

Asked about criticisms that Prairieland isn’t doing enough, he said, “that’s their opinion and I appreciate that.”

On Friday, CBC reached out to Prairieland Park with follow up questions about the 2021 horse-racing season, including questions about a global simulcast, but a response was not received by deadline.

A news release from Prairieland Park said its revenue is derived from “trade shows, banquets, agricultural exhibitions, and the Exhibition itself,” all of which have been unable to open due to COVID-19.

“The effect of that has been a significant reduction in revenues. To help maintain its strong balance sheet, Prairieland Park has been forced to make many difficult decisions over the last year,” the statement said. “The primary commitment is opening operations when safe to do so.”

Kristy Rempel, marketing manager with Praireland Park, told CKOM that the park understands the cancellation of the 2021 season “does effectively end horse-racing in the province.”

Esquirol said he’s reached out to the province in hopes of meeting to discuss further options.

He said he’s yet to get a response.

Hein, who wants to see horse-racing grow and thrive in Saskatoon, said leaders at Prairieland need to do their part to make sure the sport survives.

“Everybody needs to pull up their bootstraps and get to work and not hide behind a desk and just decide the fate of an entire industry from your chair,” she said.