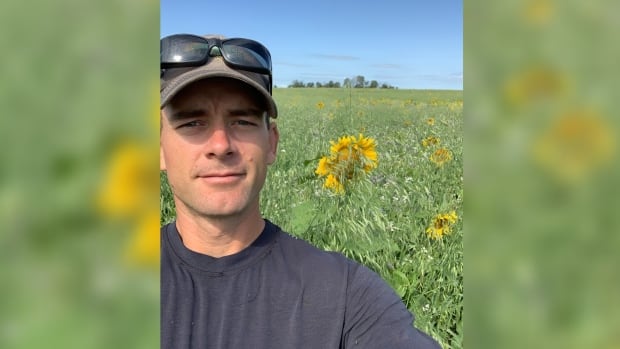 Stuart Chutter flipped through a popular weekly publication for farmers, excited to read the story featuring diversity at his small operation in print.

He was disappointed after seeing the publication, which opened with the words “Stuart Chutter is challenging typical farmer stereotypes on his operation,” had omitted reference to his sexual orientation — unlike an earlier draft he’d seen prior to publication.

“The story was missing the gay element, the aspect of the story of being a gay farmer and what that means for diversity in farming wasn’t there,” Chutter said.

He sees parallels between the need for diversity in plants to build healthy soils with the need for diverse farmers in order to create healthy rural communities. He felt this connection was highlighted in the draft of the story he saw prior to publication.

The piece was written by a freelance photographer, who had never written before for the Western Producer.

The edited version focused on Chutter’s regenerative practices, but omitted this: “His ability to see the nuance in practices and his hesitation to pass judgment is influenced perhaps by his experience as a gay man in agriculture, an industry that is still most often defined by traditional views.”

Chutter shared his disappointment on social media, saying “they ran the story with the theme of “challenging typical farmer stereotypes but completely washed the gay out of it.”

Western Producer editor Mike Raine said what happened could be labelled as a “judgment error,”  as well as a communication breakdown between the editor of the piece and the freelancer.

“The editor that was editing it decided that that was something that wasn’t necessarily germane to the story that was being told,” Raine said.

Raine said in hindsight, they would have to say “Yes, there probably is a need to keep that in the story. And we probably would have moved it up and restructured the story.”

He said the editor did not reach out to the freelance reporter about cutting the line or to request more details.

The online version of the story has been tweaked to include reference to Chutter’s sexuality.

“We look back now and go, ‘Hey, you know, that probably is one of the features of Mr. Chutter’s experience in agriculture — is probably tempered by by his being gay, and that’s a part of the diversity of Western Canadian ag,'” Raine said.

“We probably did probably let a few farmers down, in the sense that we took out something that we didn’t, at that point, consider to be that critical — that is probably a bit of an error on our part.”

Chutter said said representation of LGBTQ farmers is limited. The 36-year-old came out only a few years ago. He lived most of his life not believing that he could be both gay and a farmer. He had never known a gay farmer throughout the first three decades of his life.

His life changed when he realized it didn’t have to be either/or — and he wants to help others see that.

Farmer says diversity should be showcased

“I don’t really feel like I need to tell everyone I’m gay or announce it from the balcony, but I do want to make a conscious effort … anytime there’s an opportunity to say ‘Hey you can live rurally and be gay, you can be a farmer and be gay,'” Chutter said.

However, Chutter said there are positives that have come from this. After he posted to social media, he received a swath of support from farmers across Canada who shared messages of support for his story and for diversity in farming.

Chutter remains hopeful the conversations he had with Raine and others were productive, and offer a learning opportunity moving forward for editors.

“If there’s ever a chance to explore, to highlight or showcase diversity in ag: take it, jump on it.”