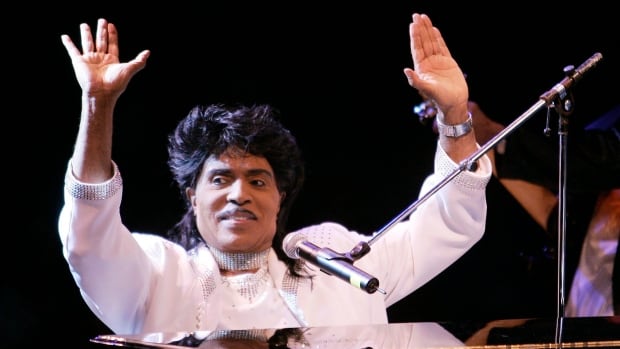 Little Richard, the electrifying and flamboyant showman whose classic tunes helped spur the explosion of rock ‘n’ roll and influenced countless musicians, has died. He was 87.

Bill Sobel, Little Richard’s lawyer for more than three decades, told the AP in an email that the musician died of bone cancer at a family home in Tullahoma, Tenn.

“He was not only an iconic and legendary musician, but he was also a kind, empathetic and insightful human being,” Sobel said.

The performer had been in declining health for years. He suffered a heart attack in 2013 and six years earlier, while still touring, needed the assistance of a helper and a cane to reach the stage.

Little Richard’s influence in popular music is almost incalculable, his primacy reflected in his inclusion among the very first group of inductees into the Rock and Roll Hall of Fame in 1986.

Canadian blues legend Colin James paid tribute to Little Richard in an interview on CBC News Network on Saturday, praising the singer for his soulful voice and for breaking down barriers in the music world. 6:14

Only Chuck Berry could also credibly lay claim to being the first to transcend the colour barrier among fans of early rock ‘n’ roll. But while Berry’s influence was largely contained to subsequent rock and blues performers, Little Richard also counted devotees who went on to make their mark in soul and modern R&B.

Through the decades his songs would be covered in just about every genre of music there is, by artists as diverse as Queen, Waylon Jennings, the MC5 and Sharon, Lois and Bram.

Tutti Frutti, his first major hit, topped the list of a panel assembled by Mojo Magazine in 2007 to consider the “100 Records that Changed the World.” The No. 2 song on that list was I Want to Hold Your Hand by The Beatles, a band that merely covered several of Little Richard’s songs, opened for him in their formative days in Liverpool and Hamburg, Germany, and were known to include a Richardesque “Woo!” or other such hollers in their early-to-mid-1960s recordings.

“For me the first wild, high voice I ever heard was Little Richard,” Paul McCartney told fellow fan Ron Wood of the Rolling Stones in a 2013 interview. “It’s all from gospel and it was just amazing.”

Whether it was through his look, showmanship or sound, those he influenced included James Brown and Otis Redding — like Richard, with roots in Georgia — to Elton John and Tina Turner.

The list also includes two famous artists who have preceded him in death in 2016. David Bowie once remarked that Little Richard’s appearance in the 1956 film The Girl Can’t Help It helped set him on his career path. At the height of his popularity in the 1980s, Prince’s look was a spitting image of the pianist.

”Darling Nikki features some of the most unrestrained piano-thumping and leather-lunged screaming since Little Richard,” music journalist Robert Palmer wrote in his New York Times review of Prince’s Purple Rain in 1984.

Even when the music didn’t necessarily sound like Little Richard, the fandom and influence was noted. It was said that under “Ambition” in his yearbook, a Hibbing, Minn., high school student who would soon change his name from Robert Zimmerman wrote: “To join Little Richard.”

Born Richard Wayne Penniman, Little Richard died Saturday morning, according to a pastor who was a close friend. His music helped lay the foundation for rock and roll and influenced countless musicians. 0:58

As a young boy he adored his mother, but had a contentious relationship with his bootlegger father.

“Richard was the most trouble of any of them. He was very mischievous, always getting up to tricks,” his mother, Leva Mae, would later remark in an authorized biography, 1985’s The Life and Times of Little Richard: The Quasar of Rock by Charles White.

While the performer agreed with that assessment, he also recalled tough times in his hometown for reasons beyond his control.

“I went through a lot when I was a boy. They called me sissy, punk, freak …” he said.

From early days, the sacred and profane were themes running through his life.

Little Richard aspired to be a preacher, and with his siblings performed gospel songs as The Penniman Singers. Female singers such as Mahalia Jackson, Ruth Brown and Sister Rosetta Thorpe were his biggest influences, although he also regarded Fats Domino highly.

While music and the church stirred his soul, he also recounted having been introduced to gay sex by adults when he was a teenager. While he would make conflicting statements through the years about his queerness — at one point “rejecting” homosexuality — he seemingly had come to terms with his identity later in life.

“I’ve been gay all my life and I know God is a God of love, not of hate,” he told Penthouse magazine in the 1990s.

Little Richard’s first official recording session was for RCA in late 1951, but nothing resonated with the public. When his father was fatally shot in an argument with an acquaintance about a year later, career aspirations took a backseat to family obligations.

Richard was washing dishes at a Greyhound bus station when his music dreams were rejuvenated through a connection with Lloyd Price, the singer of Lawdy Miss Clawdy and Personality.

As a result, he found his way to New Orleans in 1955 under the auspices of Specialty Records, a decade-old label specializing in black gospel and R&B.

“When I walked in there’s this cat in this loud shirt, with hair waved up six inches above his head. He was talking wild, thinking up stuff just to be different, you know? I could tell he was a mega-personality,” record producer Bumps Blackwell recalled.

After cutting a few unremarkable sides, the song that changed everything arrived after three takes and 15 minutes: A-WOP-BOP-A-LOO-MOP-ALOP-BAM-BOOM.

The lyrics were cleaned up from his original, “Tutti Frutti, good booty.”

“Even in the less-suggestive version that was eventually released, Little Richard’s unique vocalizing over the irresistible beat announced a new era in music,” a statement from the U.S. Library of Congress read nearly 55 years later when the song was among those selected for preservation.

But even those lyrical edits weren’t good enough for some white radio stations in the segregated 1950s. Pat Boone scored a hit with his quite less frenetic version of Tutti Frutti, and Elvis Presley covered the song, too.

Still, Richard’s arrival on the scene was seismic. With his pencil-thin mustache, exaggerated conk hairstyle and sharp suits, he made an impression before even playing a note. But his fervent shout-singing, while standing upright at the piano, was what really resonated at revue shows and on screen in DJ Alan Freed’s rock ‘n’ roll movies.

“I couldn’t believe the power of Little Richard on stage … nobody could beat Little Richard’s stage act,” said Mick Jagger. Shows had to be halted on occasion due to hysterical fans.

Youth audiences on both sides of the Atlantic lapped it up, but many parents, reporters and religious leaders decried the new music form and the influence Richard and Berry had on white teens.

The wild performances and suggestive songs were matched by escapades offstage. He talked of enjoying the “smorgasbord” of what consenting adults could get up to, his road companion often a stripper named Lee Angel.

While on tour in Australia in 1957, Little Richard announced he was giving it all up. He felt the tug of religion, attended Bible college in Alabama, and even had a short-lived marriage.

He was lured back to the stage in the 1960s; like many black artists, the publishing rights to his songs were signed away as a condition of getting into the studio.

“I had signed a very bad deal with Specialty,” he later remarked in his biography. “I got a half cent for every record sold. Whoever heard of cutting a penny in half!”

Richard made the acquaintance of The Beatles in late 1962 in Europe. His Upsetters backing band during the first half of that decade would include future stars Jimi Hendrix and Billy Preston.

He was well established on touring bills that included other performers who came to fame in the 1950s. He was among such a group at the Rock and Roll Revival festival at Varsity Stadium in Toronto in 1969, a show headlined by John Lennon and Yoko Ono.

“Looking in his fright wig, impeccable eye shadow and gay mannerisms, more like the drag queen of rock,” Richard delivered “an absolutely electrifying performance,” according to a Toronto Star reviewer.

He made an earnest attempt at a comeback soon after that show. The Rill Thing was well received in 1970 and spawned a minor hit, Freedom Blues, co-written by Esquerita, the cult artist who shared many of Richard’s stylistic and musical affectations.

But even if his own songs were no longer smashes, his imprint was never too far. John Fogerty and Creedence Clearwater Revival, after the success of Travelin’ Band, struck an out-of-court settlement around that time with the publishing company that owned the rights to Good Golly Miss Molly.

Richard would regularly make the rounds on television’s variety show circuit in the early 1970s, bringing along his brand of braggadocio (“I am the best looking man in show business!”) and rhyming off his surfeit of nicknames, which included the Bronze Liberace, the Georgia Peach, the King and Queen of Rock ‘n’ Roll.

But his personal life hit its nadir by mid-decade with increased cocaine and PCP use, as well as the death of one of his brothers.

He became a devout Seventh-Day Adventist, even pounding the pavement to sell Bibles for a time.

His personal life in order, Little Richard won acclaim for his performance as Orvis Goodnight in the 1986 film Down and Out in Beverly Hills, but a serious car accident and lengthy recovery halted any momentum for a serious onscreen resume. He would usually appear as himself in film and TV, including in Bill and Ted’s Excellent Adventure, Last Action Hero and The Drew Carey Show.

He continued to perform for several more years. Cyndi Lauper and Little Steven from Bruce Springsteen’s E Street Band would call on Richard, an ordained minister, to perform their nuptials.

A 2000 television biopic directed by Robert Townsend earned lead actor Leon Robinson an Emmy nomination for his portrayal of the singer.

RIP Little Richard, a very sad loss. My thoughts are with his loved ones.⁣<br>⁣<br>It’s Little Richard’s songs that pioneered rock’n’roll. I got to hear him and his band at the Newport Lounge in Miami and boy were they good. ⁣ <a href=”https://t.co/JXgahhJAfk”>pic.twitter.com/JXgahhJAfk</a>

The man who was considered risqué a half-century earlier was asked about hip hop in a 2004 interview on the U.S. public television show Speaking Freely.

“It’s an art form and if you think it’s nothing, try to sing some of it,” Little Richard said.

He did admit, “Some of it makes me tremble. I’ve heard those guys say some things on those records that I never knew you could say on record!”

In the same interview, Richard marvelled at his wild ride.

“God kept me here for a reason, and I never thought I’d live to see this age.”