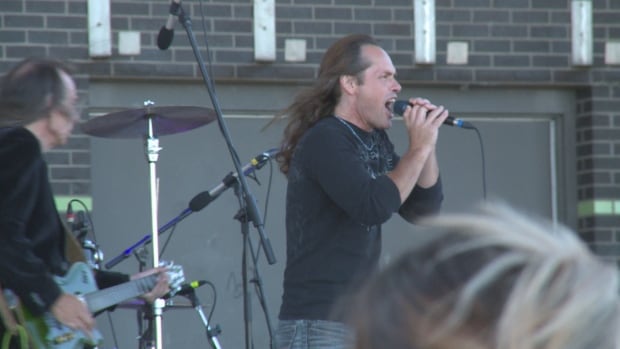 Music was ringing out from Festival Plaza on Windsor’s waterfront Sunday afternoon and evening as a free drive-in concert was held as a tribute to health care and essential workers.

“Realizing that essential workers need to decompress as well and being that our business events, we figured what a better way to help them decompress but than by enjoying a local show,” Starr Meloche, volunteer co-ordinator for Atkins Event Productions, said.

The production company held a test run concert at the end of August to test the drive-in format. This concert featured local bands and the audience enjoyed the show from their vehicles to allow for social distancing.

“Everyone’s really worked together to figure out how to make it adaptable—drive-in movies was already a thing, so we just kind of took that model and adapted it for drive-in concerts,” Meloche said.

Maxine Deleersnyder, assistant CEO at the Unemployed Help Centre of Windsor came to check out the music with her mother Irene. Her organization has been providing drive-through food bank hubs which has served over 75,000 people since the pandemic started.

“We’re very thankful for what they’re doing and coming out today and entertaining us all and showing their appreciation for essential workers,” Deleersnyder said. “It’s greatly appreciated.”

After a summer of lockdowns and few events, she said it was great to be able to get out and see the show.

“It wouldn’t matter the genre of music, just seeing people with their instruments, play live, means the world,” she said. “My mom is such a music buff and I was glad I could bring her out and be here with her today, it makes all the difference.”

For life skills worker Sarah Oszter, it’s a reminder of how life was before the pandemic.

“It may be a little bit different but it’s good to just get out and do something but also in a socially distanced way and a safe way,” she said.

Back on the stage

The event also gave the chance to local musicians and bands which have experienced a virtually concertless summer, the chance to get on a stage again.

“We’ve been shut down for a long time and it’s just really nice to see people, even if they’re in a car, honking their horns, it’s so nice to be here,” Kevin Nix of the Godzillaz said. “Musicians just want to play.”

And they were happy to get the chance to play for essential and front line workers.

“We need all them dudes,” guitarist Curtis Muldoon said.

“Without them we’d have nothing,” bassist Drew Logan added.

Just had a chat with these guys after their set – they’re called the Godzillaz and they were sure stoked to be back on the stage. <a href=”https://t.co/VxT2jQNmbG”>pic.twitter.com/VxT2jQNmbG</a>

Meloche said that she knows, with the pandemic, things are always changing. Right now she said they have the venue again to be able to hold an event next weekend but she said they hope to continue on into October.