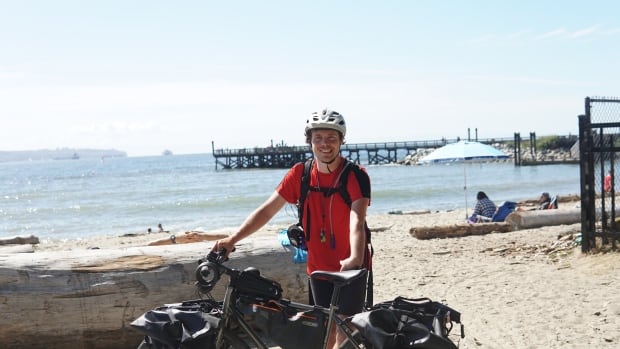 There was a steep, four-hour climb over shale rock in sweltering heat.

There was a none-too-friendly bull that chased him over a fence and the mental stress of seeing lots of bear poop and wondering where the bears were.

Former Paralympic swimmer Nathan Clement logged many experiences during his 1,000-kilometre bicycle trip across British Columbia in August, but what he remembers most is the feeling of accomplishment at the end of the journey.

“It was pretty remarkable for many reasons,” Clement said. “It was an amazing mental challenge because physically, you’re going to be hurting no matter what, day after day.

“Just kind of finding that mental toughness to be able to ride for eight or nine hours a day really helped me connect with myself and really find that same feeling I had when I was swimming and trying to make teams.”

Clement also made the ride to send a message. He began swimming at age 15 to help regain mobility in his left arm and leg after suffering a stroke caused by chicken pox at age two.

“This is a big thing for me,” said the 25-year-old. “Now that I’ve stepped away from swimming, I want to tell the story of what can be done by people with disabilities and athletes with disabilities through media and through just going out there and challenging yourself and putting yourself in situations that are tough and difficult.

“When you achieved it, it’s one of the best feeling you can ever have.”

Clement began his trip in Fernie, B.C., and ended at his home in West Vancouver. Mostly following the Trans Canada Trail, he rode for 11 days, averaging between 80 to 110 kms, taking in the scenery, dealing with the elements and talking with people along the way, like the man in Penticton who was amazed with what Clement was doing.

“We got into a good conversation about chasing goals and dreams for like an hour on the side of the street,” he said. “That was really, really cool.”

Outside of “one small crash” in the Coquihalla area, Clement didn’t experience any major problems.

The steep climb came on Day 3 on the Gray Creek Pass, an 80-km forestry road where cyclists are warned they “should carry spare brakes, chain links, tubes, tires and a comprehensive set of bike tools.”

It was near Midway in the West Kootenay region that Clement encountered a herd of cattle.

Then there were the bear droppings.

“I was running into bear poop every couple hundred metres and [thinking] I don’t like this,” he said.

Clement competed at the Rio 2016 Paralympic Games where he set a Canadian record by finishing seventh in his class in the 50-metre butterfly.

He retired from swimming in 2018 and spent six months backpacking though Asia, Australia and Europe. During this time, Clement began to think about how little travelling he had done in his home province.

“I kept thinking to myself how cool it would be to just grab a bicycle and just cycle around and see as much as I can from ground level,” he said. “When COVID hit, I unfortunately lost my job and [thought] now is the perfect time to do some training and get ready to see British Columbia.”

Clement, who is studying broadcast and online journalism at BCIT, did several media interviews during and after his trip. He also received feedback on his social media accounts.

“I had a few people reach out to me while I was cycling and they all thought it was pretty crazy what I was doing,” he said.

“Going forward, I can now say I’ve been to the Paralympics and I’ve been across B.C. on a bike. That’s just going to help me with whatever goals I try to take on in the future.”