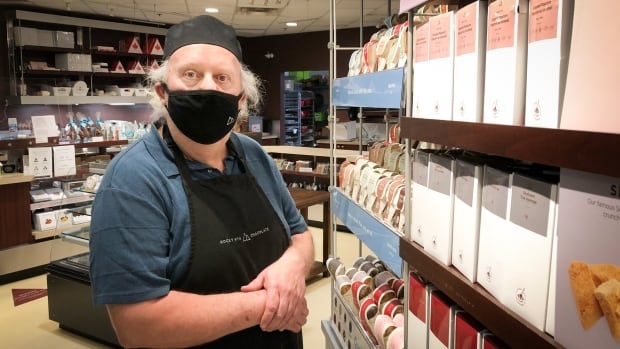 Some retailers have stopped offering booze in gift baskets after the Nova Scotia Liquor Corporation increased the permit fee to $250 a year from $15.

The Crown corporation says the gift basket business is booming, leading to increased costs for overseeing the permits, but a Sydney chocolatier believes the fee hike is unjustified and he will not pay it.

“I can’t do it because I just don’t think it’s fair,” said Sam Boutilier, owner of the Rocky Mountain Chocolate Factory outlet in Sydney’s Mayflower Mall. “I think it’s a price grab.”

Boutilier said he got a surprise last month when the NSLC sent him an email about the permit fee increase, providing only a few weeks’ notice.

The chocolatier has sold gift baskets with alcohol in them for years, but he said that business really took off in the last year.

Gift baskets made up about 10 per cent of all of Boutilier’s sales in 2020, which was some relief in a difficult retail environment due to COVID-19 restrictions.

NSLC spokesperson Beverley Ware said the number of gift basket permits has grown to “several a month, which has been quite an increase in recent years.”

She said the fee hike is necessary because the amount of work required to administer and oversee the permit process has also grown.

Three florists have told the liquor corporation they will no longer offer gift baskets after the fee increase, she said.

“This was the first review of fees that we had done in a number of years, and it really just didn’t accurately reflect the current business climate in Nova Scotia or the work that’s associated with these permits,” said Ware.

Boutilier said he doesn’t buy that.

“I don’t think it’s a legitimate argument at all because I’m going in and buying the liquor at their retail price to sell in the baskets, so they’re making that, and … I don’t have a copy of their latest financial statements, [but] I think they’re doing OK. I don’t think they’re hurting at all,” he said.

“It’s nice to say that small business is driving the economy and we’re so important to the economy. Maybe people should start listening to us and help us every now and then because it’s just ridiculous,” said Boutilier.

Ware said the wide-ranging permit fee review resulted in a number of changes, including decreased fees for breweries, wineries and distilleries operating a second location.

She said manufacturers wanting to open a retail store used to pay $100 for a permit, but that fee has now been eliminated.

The permit fee for churches offering sacramental wine for communion, however, has gone up to $25 from $15.