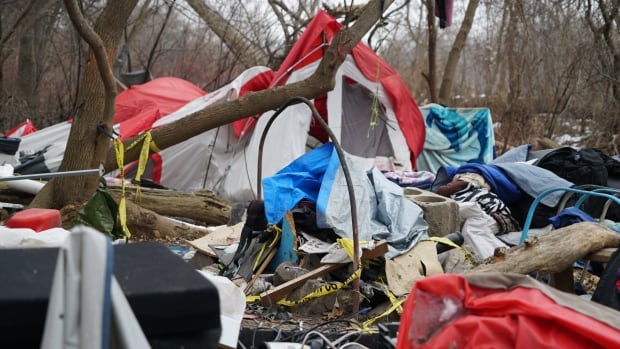 Dozens of homeless people who once camped in a London, Ont., greenspace have been expelled by city hall, but some of their makeshift homes and truckloads of unwanted debris remain strewn all around the area.

For months, this community of last resort existed on the southeastern fringe of Wellington Valley Park, a soggy, scrap of greenspace, tucked behind a commercial linen service at the foot of Maitland Street in the city’s SoHo neighbourhood.

The makeshift dwellings, many of them elaborate, were built into hillsides, beneath the canopies of ancient willows or just a few feet from the water’s edge, one even sported what looked like a steel chimney.

Last week, city bylaw officers and work crews posted eviction orders, informing residents who had built their homes that it was finally time to move along.

On Monday, the people were gone, but many of their possessions, including heaps of dirty blankets, broken tents, abandoned shopping carts, old luggage and fraying traps, were still there.

To Brie Sims, a London, Ont., homeless advocate who, along with her partner, visits the area regularly to hand out sleeping bags, clean clothes, opioid antidote kits and other items to the people who live there, their sudden departure left her with a creepy feeling.

“All we saw was the empty tents and the notice of eviction orders taped to multiple trees.”

“It’s a pretty chilling sight to see where people have been struggling and living and to see that empty because people were forcibly removed.”

Sims, who was homeless as a teenager, knows what it’s like to scrape by without shelter. At 15, she recalls huddling against others for warmth while sleeping in Victoria Park, taking shifts to ensure possessions, even her shoes, weren’t stolen while they slept.

“Simply having what is yours is very important and to have that taken away or to be forced to leave that behind is extremely impactful negatively,” she said.

CBC News reached out to the city’s manager of homeless prevention Craig Cooper, who was not available for an interview Tuesday.

City of London spokeswoman Monika Guzy explained in an email that all of the people who had been sleeping in Wellington Valley Park had been moved into a shelter before Christmas.

“Some individuals were matched with a space in the winter response program at Elizabeth Street, others moved into shelter space or temporary motel spaces. Currently all individuals relocated are successfully staying at their new accommodation.”

“Because of health and safety concerns, actively encamping in the Wellington Valley area won’t be permitted and people will be asked to engage in services or move along.”

“Prior to clean up, the Outreach teams engaged with individuals to identify which belongings they would be taking with them to their new accommodation or leaving behind. Anything left behind and not claimed by others was cleaned up by our team.”

“As of this morning there was no remaining debris and no encampments,” Guzy wrote Tuesday.

CBC News returned to the area on Tuesday after receiving Guzy’s email, only to discover that while a number of encampments had been cleaned up, others had not.

Discarded lawn chairs, clumps of clothing, were still scattered on the ground while torn pieces of trap still clung to the branches of some trees. Further north, a large field of debris of scattered belongings, including clothing, ripped tarps, luggage, dirty sleeping bags and used needles, lay in piles a few feet from the river bank.

Still, Sims can’t help feeling like the homeless people who once camped in Wellington Valley Park didn’t get treated fairly.

“They were asked to move down to Wellington Valley, even though if you live in London you know it floods almost yearly,” she said, referring to claims among some of the city’s homeless that London officials had pushed them into the area.

“After they had listened and moved their stuff and acted in a way the city had asked them to, they were asked to leave.”

City officials have countered that they have always encouraged homeless people in the city to seek shelter rather than sleep rough, in order to take full advantage of a wide array of social services available.