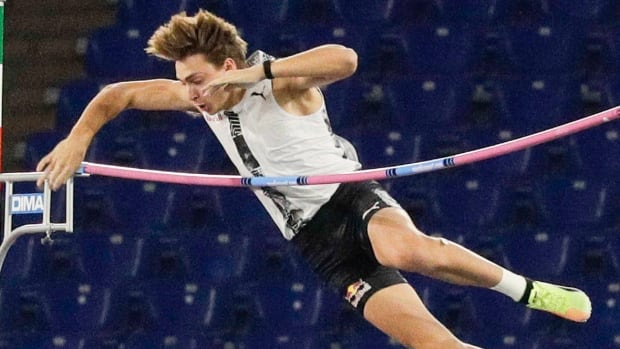 While many Canadian track and field athletes enjoy some down time before a return to training in October ahead of an Olympic year, others will be looking for a positive finish to a season disrupted by the coronavirus pandemic.

Seventeen medallists from last year’s world championships in Doha, including six champions, will return to the Qatar capital for the Diamond League season finale at Suhaim bin Hamad Stadium on Friday that will be live streamed at CBCSports.ca at 12 p.m. ET.

“It’s been a tough summer for everyone, yet we’ve witnessed some exceptional track and field performances,” Doha meet director Khalid Al Marri said in a statement on the Diamond League website. “I’m confident that in Doha … that we’ll provide a fitting finale.”

Pole vaulter Armand (Mondo) Duplantis is the headliner of Friday’s event after the American-born Swede broke Sergey Bubka’s 26-year-old outdoor world record of 6.14 metres a week ago by clearing 6.15 on his second attempt at the Golden Gala meet in Rome.

“It’s just one of those feelings where you are kind of dreaming a little bit,” Duplantis said in a story on the World Athletics website. “It’s surreal, it’s surreal, it’s a super-crazy feeling when everything lines up like that and you do a really good performance.”

Friday’s event will be held without fans in compliance with Qatar’s precautionary measures for COVID-19.

But despite no crowd noise to inspire the athletes, it wouldn’t be surprising to see a continuation of the “astonishing” performances Diamond League commentator Tim Hutchings discussed in a recent interview with CBC Sports’ Scott Russell.

“The [Tokyo] Olympics was meant to be what was happening in July and August and that’s gone, so there are so many unusual variables you have to build into this, sort of, mix. It’s hard to figure out exactly why the performances have been so special. We may never know for sure.”

The 20-year-old Duplantis, who set an outright indoor world mark of 6.18 in Glasgow in February, will battle 2019 world champion Sam Kendricks of the United States and fellow medallist Piotr Lisek of Poland on Friday at 11:18 a.m. Also in the field is Frenchman Renaud Lavillenie, the 2012 Olympic gold medallist.

“We’ve had fun this summer going right back to our [Ultimate Garden Clash remote backyard] competition in May,” Kendricks said, “but after some solid blocks of training, it’s been great to get back out and compete with these guys on the [Diamond League professional] circuit.”

At 12:56 p.m., Jamaica’s double Olympic champion, Elaine Thompson-Herah, will try to improve upon her season world-leading 10.85-second run from Rome in her fourth Doha showdown against 2019 world bronze medallist Marie-Josee Ta Lou of the Ivory Coast.

Ta Lou holds a 2-1 edge, having prevailed in 2018 and a year ago at worlds in Qatar — where Thompson-Herah was fourth — after the latter took their first matchup in 2017 in the 200.

Jamaica’s Elaine Thompson-Herah won the women’s 100 metres race at the Diamond League event in Rome with a world-leading time of 10.85 seconds. 3:22

Former heptathlete Dafne Schippers of the Netherlands was scheduled to make her season debut in the 100 at Doha but has withdrawn with a sore back. Schippers is the European record-holder in the 200 and 2015 and 2017 world champion over the distance.

A talent-laden 3,000 at 1:18 p.m. will feature a clash between world 5,000 champion Hellen Obiri and Kenyan teammate Beatrice Chepkoech, the reigning 3,000 steeplechase world champion.

Obiri has enjoyed a successful run in Doha, where she won the world 5,000 a year ago, the 3,000 at Doha Diamond League last year and set a Kenyan record of 8:20.68 in the 3,000 in 2014. Chepkoech placed second in the steeplechase earlier this month at a Continental Tour event in Berlin, Germany.

Besides Duplantis, several athletes put forth memorable performances in Italy:

South Africa’s Akani Simbine won the men’s 100 metres race at the Diamond League event in Rome in a time of 9.96 seconds. 3:47