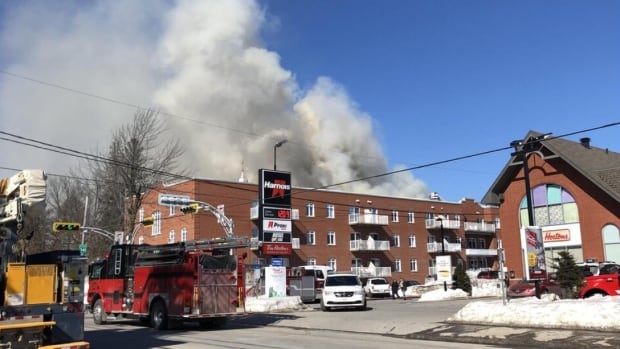 More than 160 residents of a seniors’ home in Rawdon were forced to leave their rooms Sunday morning, after a fire broke out.

According to the Sûreté du Québec, the fire started at around 5 a.m. in the basement of Résidence Sainte-Anne on Queen Street.

Although some of the residents experienced some smoke inhalation, the SQ says no one was seriously injured.

“A few of the residents were taken to hospital because of, among other things, respiratory issues,” said Michel Vauclair, regional director of Immobilier BBCF, which runs the home.

Firefighters and first responders transported the residents of the home’s 164 rooms to a nearby college campus. The residence is home to both autonomous and semi-autonomous seniors.

“We have teams of health-care workers, nurses and ambulance technicians who are there to evaluate the health of the residents. They are also there to make sure the residents can eventually be relocated for those who are unable to return to their rooms,” said Philippe Éthier, deputy director of the CISSS de Lanaudière.

The extent of the damage is still unclear and it is not yet known when residents will be able to return to their homes. It is also still unclear how the fire started.