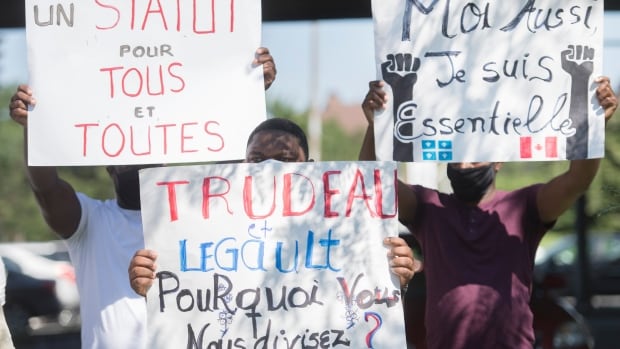 Migrant advocates in Quebec say they are dismayed by the province’s assertion that it will not expand a program to grant residency to asylum seekers who’ve been working in the health-care system through the pandemic.

The program was announced this summer as a deal between Quebec and the federal government to allow asylum seekers who worked directly with patients during the pandemic to stay in the country.

But many criticized it for excluding the hundreds of other asylum seekers in essential jobs — from food processing, to transportation, and those who cleaned the rooms of patients with COVID-19.

“How can I explain to the lady or the guy who is cleaning the room full of COVID that they cannot have the visa, but the other one was taking care of the person who is sick can?” said Marjorie Villefranche, executive director of Maison d’Haiti, who met with Quebec Immigration Minister Nadine Girault earlier this month about the possibility of expanding the program.

The deal with Ottawa, brokered in September, had followed months of reports about asylum seekers working essential service jobs while many other Quebecers stayed home. Several of the migrant workers were infected by the coronavirus and some died.

At first, Legault said the provincial government’s position on the program granting some of the migrants residency was staunch: “Where do we draw the line?” he’d told reporters in August.

But as a second wave of the pandemic wreaks havoc on Quebec’s health-care system once again, and the Immigration and Refugee Board hearings of many asylum seekers in essential jobs have been pushed further into 2021, calls to expand the program have resurfaced.

Earlier this month, Legault said he would consider it, but Villefranche says Girault was inflexible in their meeting.

“Her position is still the same. She said it’s only for those who directly work giving care to the people,” Villefranche said.

Villefranche and others, such as AQAADI, the Quebec Immigration Lawyers Association, say they won’t back down.

Guillaume Cliche-Rivard and Stéphane Valois, respectively president and vice-president of AQAADI, published an open letter Friday, calling on Quebecers to raise awareness about the plight of asylum seekers in the province.

In an interview, Cliche-Rivard noted that many have been separated from their families in their home countries for years as they await a decision in their files.

“If your family is waiting for you to get status, to be able to come in Canada, this means that you probably won’t see your child for four or five, six, maybe more, seven years,” he said.

“That’s a whole life that’s been missed. So, those delays are creating extreme distress on those people. And even through this distress, those people have been fighting back, those people went to work. They have cared for our elderly population and they did everything they could just to make good around them.”

Cliche-Rivard says he’s hopeful the Quebec government will change its position. For Villefranche, too, the fight isn’t over.

“We still need those people, they are still working with us. They are still taking care of our society, doing the jobs that nobody wants to do. After after the pandemic and are we just going to tell them: ‘OK, thank you very much. Go back home,’?” Villefranche said.