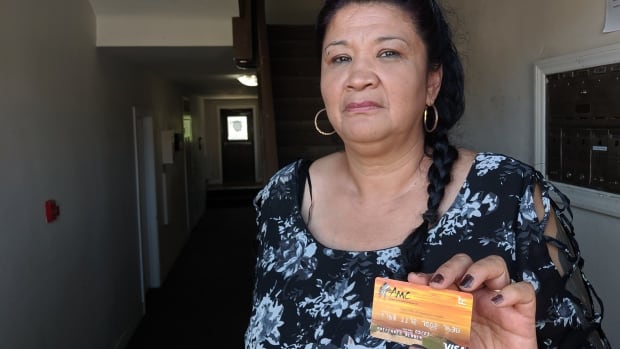 The Assembly of Manitoba Chiefs (AMC) is distributing prepaid credit cards as COVID-19 relief for off-reserve band members living in Winnipeg, but the cards’ high user fees have recipients questioning their worth.

The emergency funds being distributed by the AMC are from the $15 million in relief for First Nations people living off-reserve announced by the federal government in March. ​​​

Judie Parenteau is Anishinaabe from Skownan First Nation and received her prepaid Visa card in the mail on Thursday.

“It was $47. We have been under this pandemic for four months, so it equals out to $10 a month because there’s charges [to use] the card,” said Parenteau

She plans on getting food and cleaning supplies with the money but questions why AMC didn’t send a cheque instead of a prepaid card with user fees.

Mary Swain is Anishinaabe from Swan Lake First Nation and has been living in Winnipeg for 40 years.

“I was happy when I got my card in the mail this week, unfortunately it was only $4.90,” she said.

“I phoned [AMC] three times, three days in a row, and they never called me back. At first, they said something was wrong with the activation and to call them back, I did . . . . It’s just a waste. They should have just mailed us cheques. It would have been good for me.”

Swain is an early childhood educator and usually works two jobs to pay her bills. While she has gone back to one job, she said she is barely scraping by on a single, part-time income.

“It’s a waste with the fees and everything to activate the card. What’s $4.90? [Fees are] going to take away my $4. I don’t even have enough to buy a jar of peanut butter,” said Swain.

AMC’s choice to use prepaid cards for relief payments

AMC Grand Chief Arlen Dumas said the AMC was used as a “flow through organization” for the funding and they received $350,000 from the federal government from the $15 million that was set aside for off-reserve First Nations.

According to Jim Thunder, AMC’s business and economic development officer, over 7,000 people applied to them for off-reserve COVID-19 financial assistance. The program responsible for co-ordinating the program was AMC’s Eagle Urban Transition Centre. It approved 2,599 applications, with three different levels of relief.

Thunder said the cards were supposed to have no fees associated with their use.

“Initially we had some people that were accidentally getting charged fees,” said Thunder.

“There was a miscommunication that we were applying the rates for a certain project to this one.”

He said they had to “manually override” the charges and they are working to refund fees and fix any problems associated with the cards.

Dumas said the AMC created their own prepaid credit cards around 10 years ago as an alternative to similar cards with high user fees that people in First Nations in northern Manitoba were having to use to make purchases.

Dumas said they decided to distribute the relief funding via the cards to Winnipeg residents as they wanted to move toward contactless purchases.

“Our communities need help and it was just incredible how long it’s taken this money to actually finally hit our members,” said Dumas.

Dumas said the AMC is still waiting for details on an additional $75 million for pandemic funding for off-reserve members that was promised by the federal government in May.