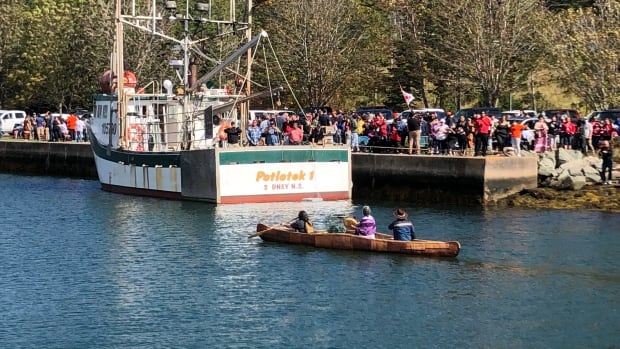 An Indigenous moderate livelihood lobster fishery has been proceeding peacefully in the waters of eastern Cape Breton for the past month, but tensions exist.

Potlotek First Nation launched the fishery under its own management plan in St. Peters Bay on Oct 1.

Local non-Indigenous fishers have not interfered, but that doesn’t mean they support it.

“It’s not that we agree with the fishery that’s going on, because we don’t,” said Gord MacDonald, president of the Richmond County Inshore Fishermen’s Association. “It hurts us deeply.”

MacDonald said his group has abstained from the violence and protests that have taken place in southwest Nova Scotia. He said that is out respect for the spirit of co-operation that has been cultivated over the past 20 years since the Supreme Court of Canada affirmed in the Marshall decision the Mi’kmaw right to earn a moderate livelihood from fishing.

“Commercial fishermen and Aboriginal fishermen have worked side by side, and co-operatively,” he said. “That’s breaking apart right now.”

For their part, the Mi’kmaq say they are tired of waiting for the Department of Fisheries and Oceans to work with them to define what constitutes a moderate livelihood.

“We have tried to work nation to nation, but have been met with doors being slammed in our face,” said Potlotek Chief Wilbert Marshall, testifying before the Fisheries and Oceans parliamentary committee Thursday.

DFO has told Potlotek that its fishery is not licensed and not authorized, said Marshall.

“DFO continues to look at our treaty right to a moderate livelihood through a colonial lens,” he said. “They have continued to maintain their position that we should fish under rules using their licence and their reasons. But we have the right to self-govern … our fisheries and to develop our own sustainable livelihood fisheries, separate from the commercial fisheries.”

While MacDonald acknowledges the Mi’kmaw treaty right to fish, he wants to see the Indigenous fishery work under the same collective rules that his members do to ensure conservation.

“In St. Peters Bay, we were told that it was going to be 420 traps, a few people out there just fishing to make some form of income,” said MacDonald. “And it’s expanded to over 2,000 traps in the last few weeks. It’s something that starts, but it grows. And as it grows, if you’re feeding economics at the expense of fish, that’s a recipe for disaster.”

MacDonald said the Mi’kmaq have made the point that the issue of a moderate livelihood needs to be addressed by government. Now he wants to see Potlotek remove its traps from the water while all parties get back to the table and come up with a solution.