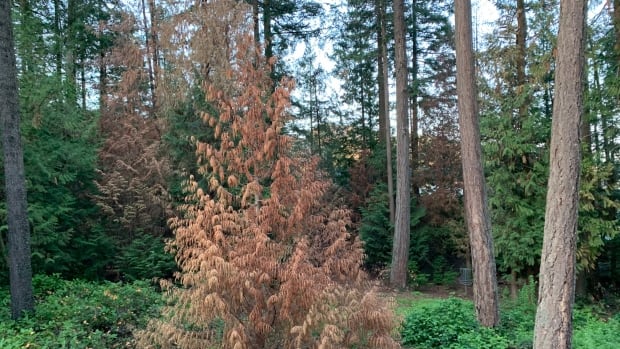 In Parksville, B.C., over half of the Western red cedars in the existing canopy are dying. Now the city’s parks department is looking for more resources to manage what’s left.

Over the last few decades, the Western red cedar, British Columbia’s provincial tree, has struggled with drier climate conditions brought on by climate change, says Guy Martin, the parks and facilities manager for the city of Parksville.

“The lack of water sort of weakens the shallow rooted trees [after] a few summers of drought and slowly, the finer roots are lost and the tree loses its ability to uptick moisture and then they start, what I call, a spiral of decline, and they die from the top down,” said Martin on CBC’s All Points West.

Martin says the Western red cedar, which is often found alongside coastal Douglas fir, is everywhere in the city within green spaces, parks, near streams and rivers, and in people’s yards. He says about 50 per cent of those trees are compromised.

“It becomes a safety issue, obviously,” he said, referring to falling cedar trees. He says members of his department are often called to visually inspect the damaged trees and collect the debris that they leave behind.

“It’s a fairly big issue and what we’ve seen is that our budgets have been exponentially increasing as we get calls from the public … and it’s [taking away] from the core work we should be doing in our municipal parks department when it comes to urban forestry,” he said.

Martin’s team has proposed a $150,000 grant over three years to specifically deal with the dying trees and replant other species to maintain the city’s tree canopy.

“It’s more efficient and more effective and it’s fiscally responsible on behalf of us to go in there and put our hands on it once rather than two or three times.”

Ultimately, Martin says his municipal team can only focus on the management of the situation as saving the cedars requires major climate interventions.

“We’ve all heard [about] reducing our footprint and doing what we can to reduce our global warming effects,” he said. “With any luck perhaps, something will be able to change that and we have a recourse back to what we should be seeing for our weather patterns.”

Listen to the interview on CBC’s All Points West:

All Points West9:58Parksville parks manager aims to save Western Red Cedars being lost to affects of climate change

It’s British Columbia’s provincial tree and it’s dying. Over the last few decades, Western Red Cedars have been struggling with drought associated with climate change. In Parksville, over half of the existing canopy of cedars is now gone. Guy Martin, the Parks and Facilities manager, has asked the City for more resources to keep the cedars alive. He spoke with Kathryn Marlow. 9:58