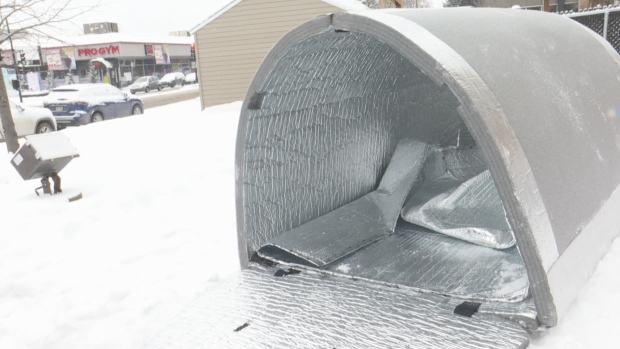 Despite the curfew, frigid temperatures and available shelter space, many of Montreal’s homeless prefer the freedom of sleeping outdoors and one Montreal organization wants to keep those who prefer the outside safe from the elements.

CARE Montreal, a homeless advocacy organization, is offering 20 bivouac shelters made out of foam insulation with reflective foil to those in need, as part of a pilot project. The shelters are designed to keep people warm by trapping body heat.

“Our thinking was, why don’t we bring the shelter to them instead of asking them to come to the shelter,” said Michel Monette, the founder and director of the organization which is based in Hochelaga-Maisonneuve.

The insulated, waterproof shelters are cylindrical, about two-metres long and come in one- or two-person models that can get up to 20 C warmer than outdoors.

“What we know is shelters are not for everyone,” said Monette.

Monette hopes these portable shelters can be a safer option for people who want to avoid shelters.

“It’s a very very soft foam and it’s insulated and the person inside can be easily protected from the weather,” Monette said, noting there is some ventilation to allow for airflow.

So far, one homeless person has tested out the shelter and complained of a few flaws but Monette is working with the shelter’s designer to make some improvements.

The bottom line is, Monette doesn’t want to see people sleeping out in the cold. He said he has worked out a deal with Montreal police.

He said the SPVM has agreed to not ticket people sleeping in the shelters for violating curfew.

A spokesperson for Montreal directed all questions to the SPVM and the SPVM has not yet responded to a second request for comment.

Monette said the main goal is to save lives as temperatures can drop to deadly levels in the winter.

“People are still outside, who sleep outside, and it’s very sad,” he said. “This is what we don’t want.”